World Bank projects Indian economy to shrink 3.2% this fiscal, while WHO warns people are still at risk of Covid-19 infection 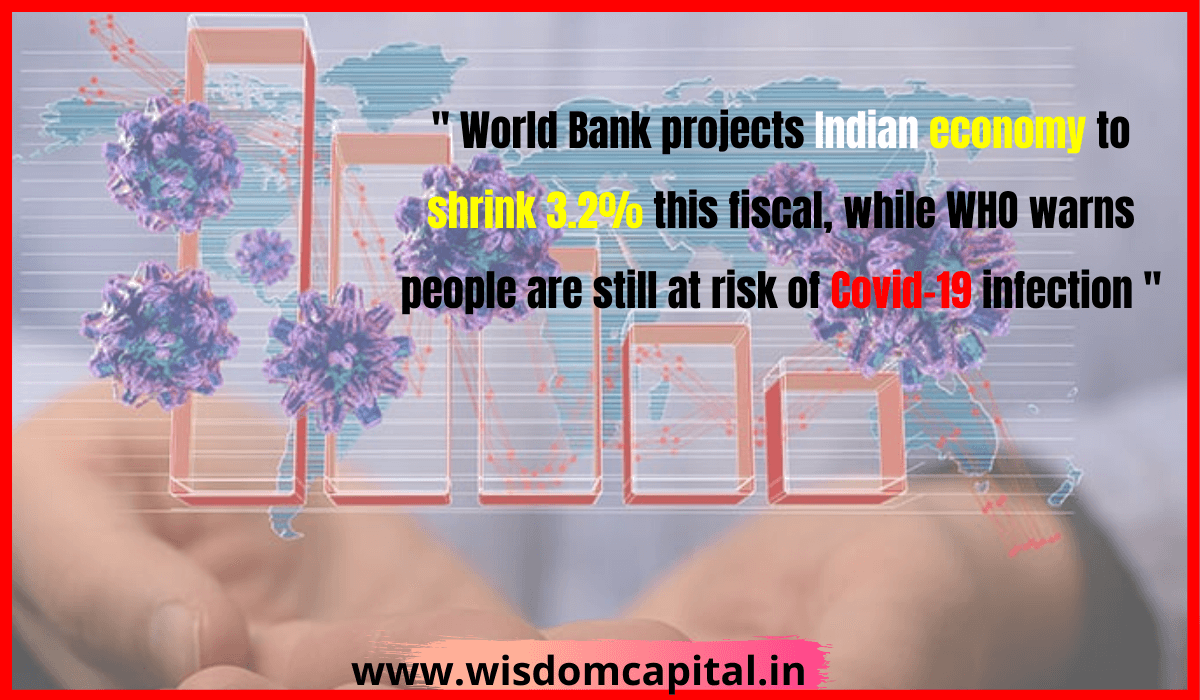 World Bank projects Indian economy to shrink 3.2% this fiscal, while WHO warns people are still at risk of Covid-19 infection

India’s economy will contract 3.2 per cent in FY21 as stringent measures to restrict the spread of the Covid-19 pandemic have heavily curtailed activity in Asia’s third largest economy, the World Bank said on Monday.

Joining a chorus of global agencies that are forecasting a contraction in growth rate due to the coronavirus lockdown halting economic activity, the World Bank, in its latest edition of the Global Economic Prospect, downgraded its projection of India by a massive negative nine per cent.

The Washington-based multilateral lender said the contraction will largely materialise in the year to March 31 and the Indian economy will recover to grow at 3.1 per cent in the following year.

“Stringent measures to curb the spread of the virus, which heavily curtail short-term activity, will contribute to the contraction,” the World Bank said in its report.

The report added that spillovers from contracting global growth and balance sheet stress in the financial sector will also adversely impact activity, despite some support from fiscal stimulus and continued monetary policy easing.

The World Bank took into account measures taken by the Centre, including expenditure on health care to bolster the coronavirus response, wage support, in-kind and cash transfers to lower-income groups, deferral of tax payments, as well as loan and liquidity support for small enterprises and financial institutions.

Earlier, global rating agencies such as Moody’s Investors Service, Fitch Rating and S&P Global Ratings have all projected  the Indian economy to contract at least by 5 per cent during April 2020 to March 2021 fiscal. Crisil has said this would be India’s fourth recession since Independence, first since liberalisation, and perhaps the worst to date.

Meanwhile, as India reopened its economy on Monday under the first phase of the end of the multi-phased lockdown that began on 25 March, the World Health Organization said that most people across the world are still at risk of Covid-19 infection and that the biggest threat to further spread is complacency, as mass gatherings resume in nations worldwide.

The Covid-19 pandemic is worsening across the world as the number of new coronavirus infections on Sunday reached an all-time high, WHO Director-General Tedros Adhanom Ghebreyesus said during a press conference at the agency’s Geneva headquarters.

He said that almost 75 per cent of the cases come from 10 countries, mostly in the Americas and South Asia.

Deputy Chief Minister Manish Sisodia said yesterday that the Delhi Disaster Management Authority (DDMA) will hold a meeting today to evaluate whether there is community transmission of the virus in the city.

If community transmission is taking place in Delhi, the AAP government would have to change its strategy accordingly to deal with the situation, said Sisodia, while addressing an online press briefing.

With the national capital witnessing an onslaught of the Covid-19 pandemic for so many days, as over a thousand coronavirus cases are reported daily, former chief of Indian Council of Medical Research (ICMR), NK Ganguly, had on June 6 said that it will not be wrong to say that Delhi has entered into community transmission or Stage 3. “In fact, many cities, including Delhi, Mumbai and Ahmedabad, which have a high caseload are in the community transmission stage, otherwise how would one justify hundreds of cases every day.”