We must be conducive to enhance the morale & honour of our soldiers: PM Modi; Centre issues an order to bar investment from Chinese firms 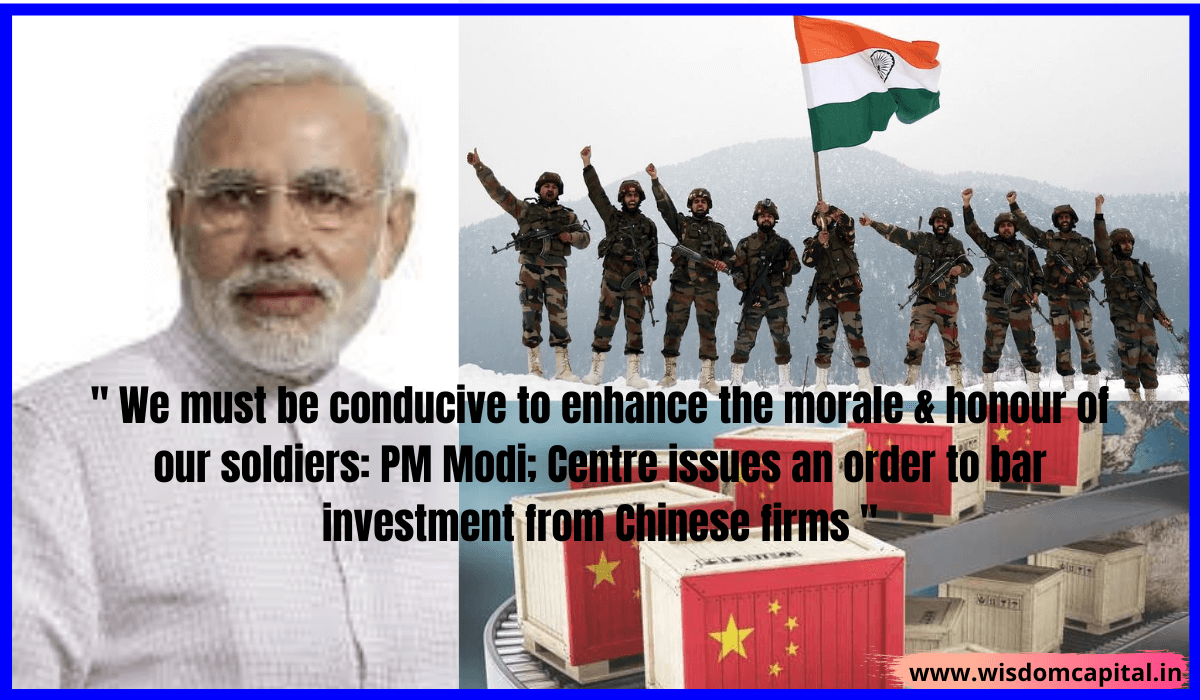 We must be conducive to enhance the morale & honour of our soldiers: PM Modi; Centre issues an order to bar investment from Chinese firms

On Sunday, Prime Minister addressed the nation through 67th edition of his monthly radio programme Mann Ki Baat. During the address, he said that back in 1990s Pakistan backstabbed India. “Today, is the 26th of July, Kargil Vijay Diwas. It was on this day 21 years ago, our army unfurled the flag of victory in the battle of Kargil. India can never forget the circumstances under which the battle of Kargil took place. Pakistan had embarked upon this misadventure, nursing delusions of encroaching upon Indian soil, to distract attention from the internal strife prevailing there. India was then in the process of making efforts to foster good relations with Pakistan,” said Modi.

While PM Modi addresses Mann Ki Baat on the last Sunday of every month, during his recent address, he highlighted the valour and courage of people fighting against the Covid-19 pandemic. He cited examples from Bihar, Jharkhand on how small local products are gaining traction. PM Modi cautions people to remain alert and not to lower their guard against the deadly Covid-19.

Modi also advised citizens to refrain themselves from any kind of practices detrimental to the nation. “At times, without paying heed to the essence, we encourage certain things on social media that are detrimental to the country. There are times when we keep forwarding things out of sheer curiosity. Despite knowing that it is wrong, we keep doing it,” said Modi.

On Thursday, Centre issued an order stating that companies sharing borders with India will have to register with the Department of Promotion of Industry and Internal Trade before bidding for any government contract.

It is reported that the decision was taken to ‘strengthen the defence of India and national security’. On Sunday, two government officials added that bidding procedures are already underway for Indian government tenders or contracts and it won’t be scrapped just due to any Chinese firm’s participation. They also informed that this being done to ‘avoid any unnecessary delays in the execution of key projects.

The order issued by the centre didn’t specify any country and is applicable to all the prospective contracts and tenders. As reported by a leading newspaper, two officials from the government who spoke on the condition of anonymity, said that the ongoing order is issued to curb Chinese investment in the country. The ongoing tender process will only be scrapped if it has anyone of the Chinese firm as qualified bidders.

The order has already been circulated amongst all the government ministries, departments, public sector units and state governments stating them not to scrap any tender or commence a new tendering processes only due to a presence of a Chinese firm.  A clarification was also issued on Friday by the Ministry of Finance after stakeholders raised concerns over the order.

This order comes after days when India and China have had a month-long stand-off which resulted in the death of 20 soldiers. The two countries haven’t been able to create a breakthrough to reduce the tensions despite many military and diplomatic negotiations. Recently, the centre also banned 56 Chinese apps on Indian soil.