Self-reliant India will get its growth back, assures PM at CII event 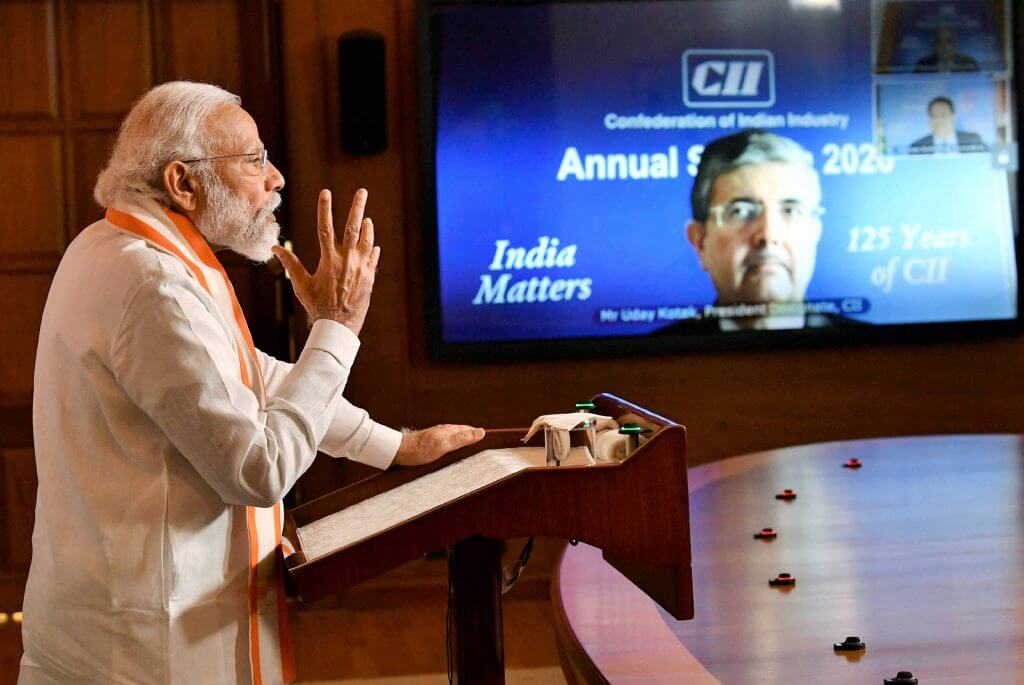 Self-reliant India will get its growth back, assures PM at CII event

Prime Minister Narendra Modi today said that India will tide over the Covid-19 pandemic and will get back on track with the Centre’s decisive policies.

He called for corporate leaders to take an oath to make India self-reliant while addressing the annual session of the Confederation of Indian Industry (CII)  to mark 125 years since its inception in 1895, through video conference. Sharing his vision on ‘Getting Growth Back’ with representatives of the industry, he said:  “We will definitely get our growth back. India will get its growth back.”

PM’s address comes at a crucial time for the nation. Firstly, the Modi government completed one year of its second term in the office. Secondly, companies are resuming operations after the Ministry of Home Affairs allowed relaxations amid lockdown. Thirdly, ratings agency Moody’s on Monday downgraded India’s rating for first time in 22 years.

Modi offered India Inc a new mantra: “Made in India, Made for the World” while urging industry leaders to first create a robust local supply-chain to help India play a key role in the global supply-chain.

He said that the world is looking for a trusted, reliable partner and India has the potential, the strength and the ability.

Describing MSMEs (Micro, Small and Medium Enterprises) as the country’s economic engine, the PM outlined steps taken for small industries hit by the virus and also listed measures to boost farmers — like ending the policy of trade with only fixed people.

He also stated that the Centre has now allowed farmers the freedom to sell their produce to anyone they wish to for the best price they get.

On Monday, Modi unveiled the technology platform, Champions, — an acronym for Creation and Harmonious Application of Modern Processes for Increasing the Output and National Strength to empower MSMEs.

As per a PIB release, the portal is a one-stop place for the MSME sector, with focus areas being support and hand-holding, grievance redressal, harnessing entrepreneurial talent, and discovering new business opportunities.

A total 2.1 crore jobs were added in May, and the labour participation rate improved substantially, CMIE said in a media release. The latest data on joblessness from the private sector think-tank comes days after the nation entered the fifth phase of a nationwide lockdkown to halt the spread of the Covid-19 pandemic, which has hampered an already-slowing economy, impacting businesses and leaving thousands of workers unemployed.

The number of reported Covid-19 cases in India rose 9.1 per cent over the last two days to 198,706, latest data from the Union Ministry of Health and Family Welfare (MoHFW) showed. The death toll reached 5,598, rising 8.4 per cent over the same period. Both numbers had surged about 9.8 per cent each in the preceding 48 hours.  Coronavirus cases, world-over, reached 6,265,496 cases