PMO clarifies Modi’s no ‘Chinese intrusion remark’, while US calls China ‘rogue actor’, blaming it for ‘escalating’ tension with India 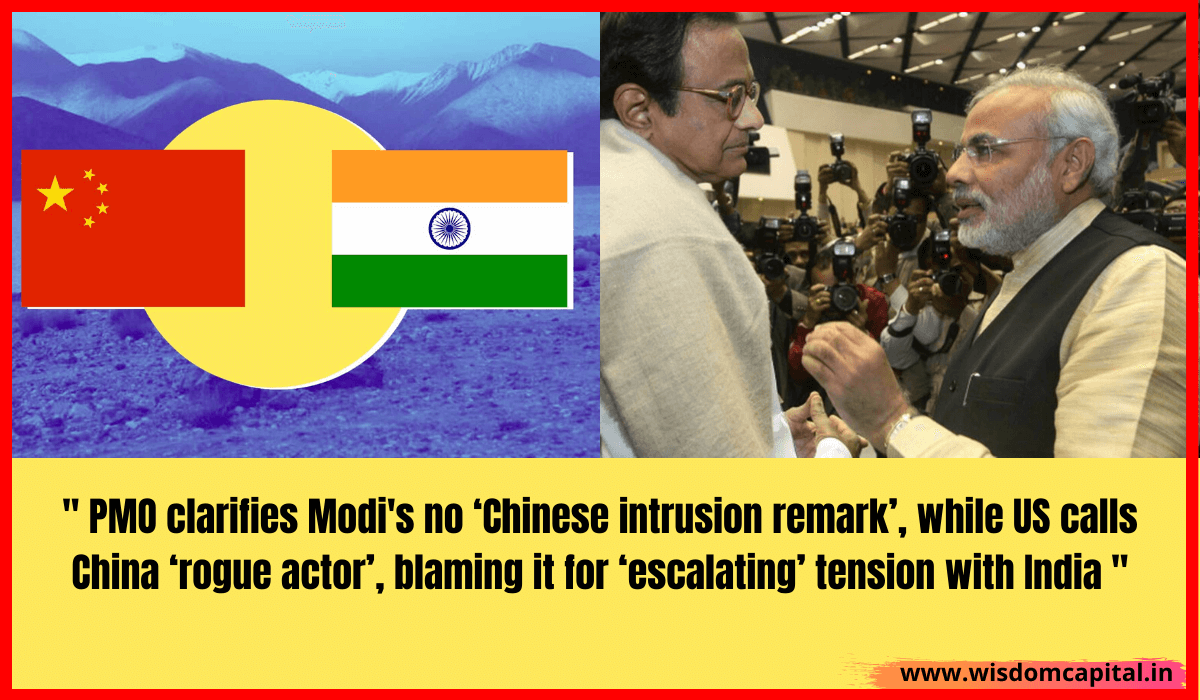 PMO clarifies Modi’s no ‘Chinese intrusion remark’, while US calls China ‘rogue actor’, blaming it for ‘escalating’ tension with India

After senior Congress leader P Chidambaram said that Prime Minister Narendra Modi’s remark that no outsider was inside Indian territory in Ladakh, had practically left everyone “baffled and bewildered”,  the Prime Minister’s Office today clarified that the violent face-off on June 15 happened because China was trying to erect structures “just across the Line of Actual Control (LAC)”and did not desist from such actions.

The government will not allow China to make unilateral change of the LAC border the strongly worded clarification said.

“What is Indian territory is clear from the map of India. This Government is strongly and resolutely committed to that,” the statement said.

On Friday at the all-party meeting on the violent clashes between India and China in Galwan Valley in Ladakh on Monday evening that left 20 Indian soldiers dead, Modi had said that neither anyone has intruded into Indian territory nor taken over any post. India’s forces are doing what they have to do to protect the nation, whether it is deployment, action or counter-action. India’s patrolling has been enhanced due to newly built infrastructure, especially along LAC, Modi said while referring to the 3,488 kilometres LAC between India and China,

The statement also said by way of clarification that attempts are being made in some quarters to give a mischievous interpretation to remarks by the Prime Minister at the all-party meeting.

Meanwhile, India has completed construction of a strategically significant bridge over the Galwan river in eastern Ladakh, notwithstanding strong opposition to it by China’s People’s Liberation Army, government sources said on Friday.

The construction of the bridge was one of the reasons behind the aggressive behaviour by the Chinese army in the region that triggered the six-week standoff between India and China.

The 60-metre bridge is around 4 km east of the confluence of Shyok and Galwan rivers, and links the narrow mountainous region to the Shyok-Daulat Beg Oldi road.

The sources said the bridge will facilitate quicker movement of Indian troops in the area that is not very far from the site of the June 15 clashes.

US launches scathing attack on China

In a scathing attack on the Chinese government, the US on Friday criticised the Chinese Army for “escalating” the border tension with India and described the ruling Chinese Communist Party as a “rogue actor.”

During his virtual address on “Europe and the China Challenge” during the 2020 Copenhagen Democracy Summit on Friday, US Secretary of State Mike Pompeo said the Chinese Communist Party wants to undo all the progress the free world has made through institutions like the North Atlantic Treaty Organization (NATO) and adopt a new set of rules and norms that accommodate Beijing.

The top American diplomat added that for many years, the West, in an era of hope, believed they could change the Chinese Communist Party and improve the lives of the Chinese people along the way.

He further stated that the CCP isn’t just a rogue actor in its own neighbourhood. It also lied about the coronavirus and let it spread to the rest of the world, while pressuring the World Health Organisation to assist its cover-up campaign. Hundreds of thousands of people have been killed, and the global economy has been decimated.

While pushing disinformation and malicious cyber campaigns to undermine governments, China is trying to drive a wedge between the US and Europe, Mike Pompeo said.

The popular Chinese social media app, WeChat, has removed updates by the Embassy of India on the current border dispute including Prime Minister’s  statement on the violent Galwan clash.

The reasons given for the removal of the posts include divulging state secrets and endangering national security.

The updates published on WeChat included the Prime Minister’s comments on the India-China situation, the phone call between the Indian and Chinese foreign ministers held on Thursday and a statement by the MEA spokesperson.

A day earlier, the EoI had to issue a clarification on its Chinese Twitter-like Weibo account after the same statement by the MEA spokesperson was deleted.