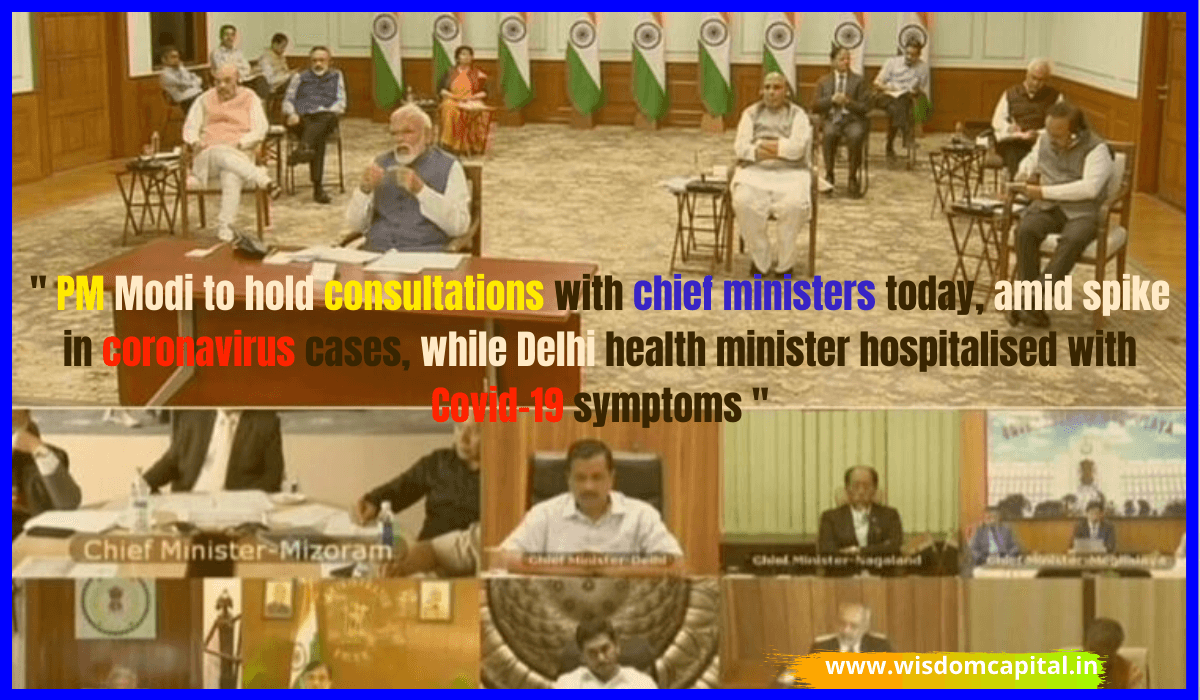 Even as India’s coronavirus tally passed the 3.4 lakh-mark today with 10,667 new Covid-19 cases in the past 24 hours and 380 deaths, Prime Minister Narendra Modi will later in the day hold a fresh round of consultations, via video conference, with chief ministers, Lt governors and administrators of 21 states and union territories today.

PM Modi will interact with chief ministers of Punjab, Kerala, Goa, Uttarakhand, Jharkhand, the northeastern states and some UTs.

On Wednesday, the prime minister will hold consulations with chief ministers of 15 states and the LG of Jammu and Kashmir, including high case load states such as Maharashtra, West Bengal, Delhi, Karnataka, Gujarat, Bihar and Uttar Pradesh. The two-day virtual meet comes against the backdrop of rising number of Covid-19 cases in the country. These will be the sixth and seventh meet between PM Modi and various chief ministers on the COVID-19 pandemic.

Delhi health minister Satyendar Jain has been hospitalised due to high fever and a drop in his oxygen level. The minister was admitted to the Rajiv Gandhi Super Specialty Hospital today,  two days after he attended a meeting convened by Union Home Minister Amit Shah. Chief Minister Arvind Kejriwal also participated in the meeting, among others.

A Delhi government spokesperson said a coronavirus test will be conducted on the health minister later in the day. In a tweet on Tuesday morning, Jain wrote: “Due to high-grade fever and a sudden drop of my oxygen levels last night I have been admitted to RGSSH. Will keep everyone updated.”

Last week, Delhi chief minister had self-isolated himself at his home after he had a bout of fever and complained of sore throat. Kejriwal had tested negative for Covid-19.

In a tweet, Kejriwal wished speedy recovery to the health minister, after Jain was hospitalised with Covid-19 symptoms.

In a big victory for the AAP government in Delhi, the High Court ruled in its favour, allowing it to attach Hotel Surya to the Holy Family Hospital, which is a dedicated COVID-19 facility, for the treatment of coronavirus positive patients.

The Delhi government, through an order on May 29, had attached four and five-star hotels with large hospitals in the national capital involved in treating coronavirus patients.

However, this order by the government was challenged by Hotel Surya in the Delhi HC, the order on which came yesterday allowing the Delhi government to attach the hotel with the hospital.

Kejriwal is expected to visit the hotel around noon today to review the facilities at the premises.

To help India in the fight against the deadly coronavirus, US Ambassador to India Ken Juster handed over the first tranche of 100 ventilators from the United States Agency for International Development to India at the headquarters of the Indian Red Cross. The US has promised to donate 200 ventilators to the country.

These ventilators are being manufactured by Zoll–an US-based firm and arrived from Chicago in the United States and arrived by an Air India flight on Monday.