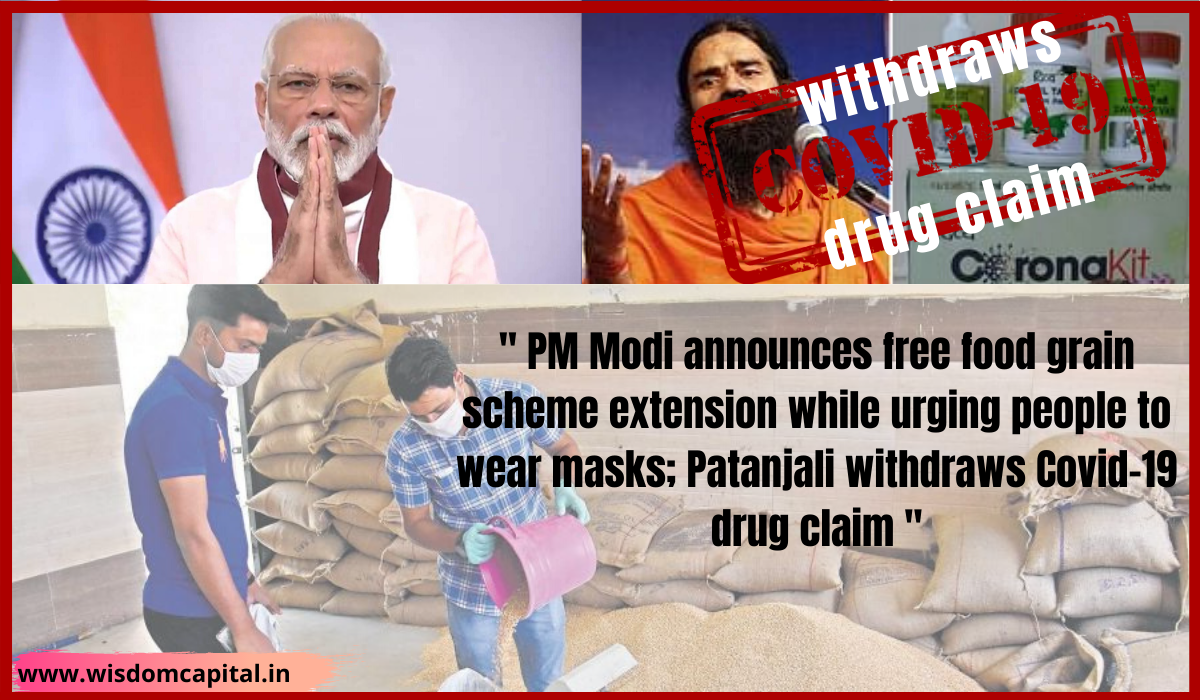 Prime Minister Narendra Modi today, in his sixth address to the nation since the start of the Covid-19 pandemic, announced the  Pradhan Mantri Garib Kalyan Anna Yojana, a key government scheme for free food grain to more than 80 crore poor people, will be extended until November.

PM Modi’s address came as the Covid-19 tally in the country surged beyond 5.66 lakh.

More than Rs 90,000 crore will be spent in this expansion of the scheme, and when the expenses of the last three months are added to it, it becomes almost Rs 1.5 lakh crore, the prime minister added during his virtual address.

PM Modi once again stressed about following rules like wearing masks and following social distancing norms and said nobody is above rules, while stating a timely lockdown and other decisions saved many lives but people have been negligent in their personal and social behaviour since Unlock 1.

India registered 18,522 new coronavirus cases in a span of 24 hours, slightly lower than Sunday’s record of 19,906, according to the Union health ministry on Tuesday.

While announcing new rules for Unlock 2.0 starting July 1, the government said training institutes run by the central and state governments will be allowed to function from mid-July, while schools and colleges will remain shut until July 31. Apart from curbs in containment zones, there will be no restriction on “inter-state and intra-state movement of persons and goods”.

Domestic flight services will be further expanded while international air travel will continue in a limited manner under the Vande Bharat repatriation mission.

Night curfew timings will be now in force from 10 pm to 5 am.

Meanwhile, Patanjali Ayurved today said that it never claimed to have made a medicine for the highly infectious coronavirus.

Yoga guru Ramdev’s organisation has withdrawn from its earlier claim, in reply to the notice given by the Uttarakhand Ayush Ministry.

Patanjali Ayurved CEO Acharya Balakrishna stated in his reply to the notice that Patanjali has never claimed to make a medicine for coronavirus. Rather, Covid-19 patients have been cured with this medicine. The drug was made under the license issued by the Ayush Ministry.

In a positive development, a Hyderabad-based company called Bharat Biotech developed India’s first locally made COVID-19 vaccine named COAXING. The firm has achieved this feat in collaboration with the Indian Council of Medical Research (ICMR) and National Institute of Virology, Pune.

The Drug Controller General of India has allowed Bharat Biotech to hold Phase 1 and 2 of clinical human trials after the firm submitted results generated from preclinical studies, demonstrating safety and immune response, said a statement issued by the firm.

The two phases of the trials are designed to test whether the vaccine is safe, rather than whether it is effective.

Volunteers will be immunised with the vaccine in July.

Tests in animals indicate the vaccine is safe and triggers an effective immune response.

The trials are among many across the world ,including six Indian firms, that are developing vaccines.

The vaccine is developed from a strain of the virus that was isolated locally and weakened under laboratory conditions.

Bharat Biotech has delivered more than 4 billion doses of vaccines worldwide, and has developed vaccines for H1N1 and rotavirus, among other diseases.