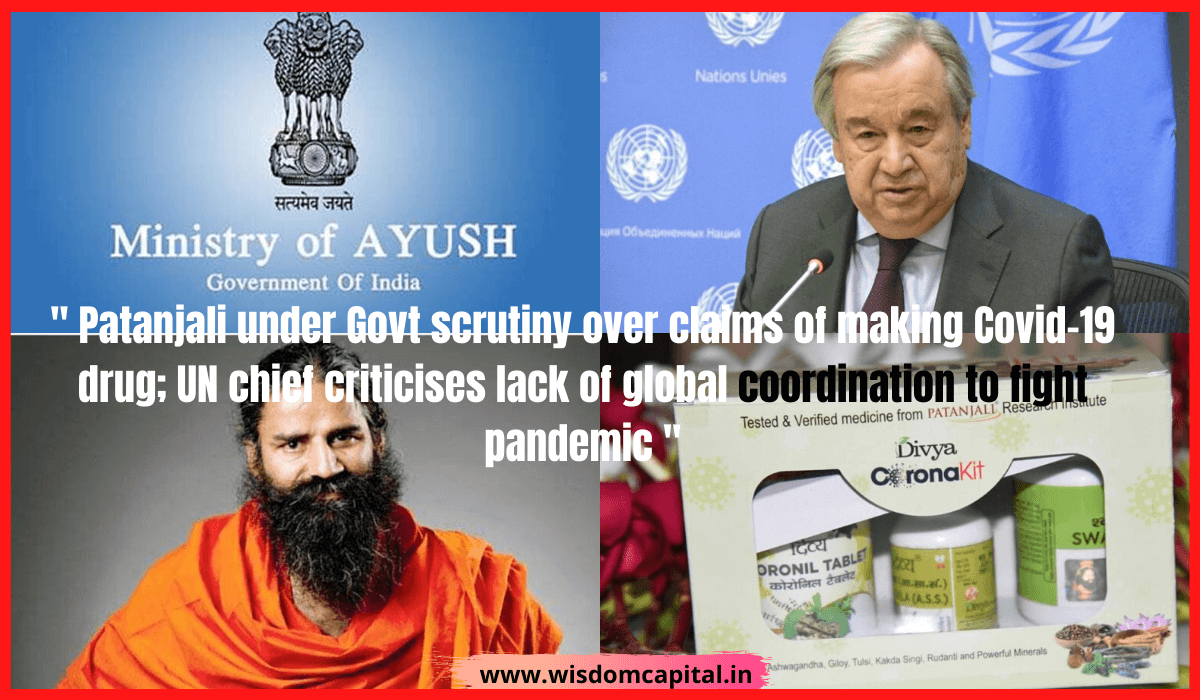 Even as India saw record single-day jump of 15,968 Covid-19 cases and 465 fatalities, pushing the infection tally to 4,56,183 and the death toll to 14,476 today, Yoga guru Ramdev’s Patanjali Ayurved Ltd was on Tuesday asked by the Centre to provide details of Ayurvedic medicines it launched claiming they can cure coronavirus within a week. The company has also been ordered to stop advertising or publicising such claims until they have been examined.

According to Patanjali’s founder Ramdev, the medicines, “Coronil and Swasari”, priced at Rs 545, were developed based on research and trials on 280 patients across India.,

The Ministry of Ayurveda, Yoga & Naturopathy, Unani, Siddha and Homoeopathy (AYUSH) has ordered Patanjali to stop advertising the products, asking the company to provide at the earliest details like the composition of the drugs, the findings of its research, the hospitals where the research was conducted, whether the company had a clearance from the Institutional Ethics Committee and whether it had registered for the clinical trials.

In a statement released hours after the Patanjali launch, the Ayush Ministry said that facts of the claim and details of the stated scientific study are not known to the ministry.

The Ayush Ministry also asked for copies of the license and product approval details of the Ayurvedic medicines, which were made in Haridwar, Uttarakhand.

Responding to the Ministry, Ramdev’s associate and Patanjali CEO Acharya Balkrishna has claimed that the Centre has been provided with all the necessary details of the clinical trials of Coronil. He further stated that they have 100 per cent fulfilled all standard parameters for Randomised Placebo-Controlled Clinical Trials and the information has been given to the Ministry of AYUSH.

Two police complaints have also been registered against the yoga guru’s company in Rajasthan and Haryana for “misleading the public” and launching a medicine without the approval of the Indian Council of Medical Research or ICMR.

There is no scientific evidence of any alternative cure for the novel coronavirus, even as vaccines are being tested by many countries. The World Health Organisation (WHO) has also cautioned against such claims.

In collaboration with the privately-owned National Institute of Medical Sciences or NIMS University, Jaipur, patanjali developed the medicines.

Stating that the whole country and the world were waiting for a medicine or vaccine for the novel coronavirus, Ramdev claimed Patanjali’s medicines, prepared by the combined efforts of Patanjali Research Centre and NIMS, showed “100 per cent favourable results” in clinical trials

Tests had been done on all types of patients, barring those who are highly infected and are on ventilators, said Ramdev.

As coronavirus continues to accelerate across Latin America and the Caribbean with over 100,000 coronavirus deaths and Asutralia reporting its first coronavirus death in more than a month on Wednesday, the United Nations chief criticised the total lack of international coordination in tackling the coronavirus pandemic and warned that the go-it-alone policy of many countries will not defeat Covid-19. Secretary-General Antonio Guterres said in an interview that what needs to be done is to make nations understand that by acting in isolation “they are creating the situation that is getting out of control and that global coordination is key”.