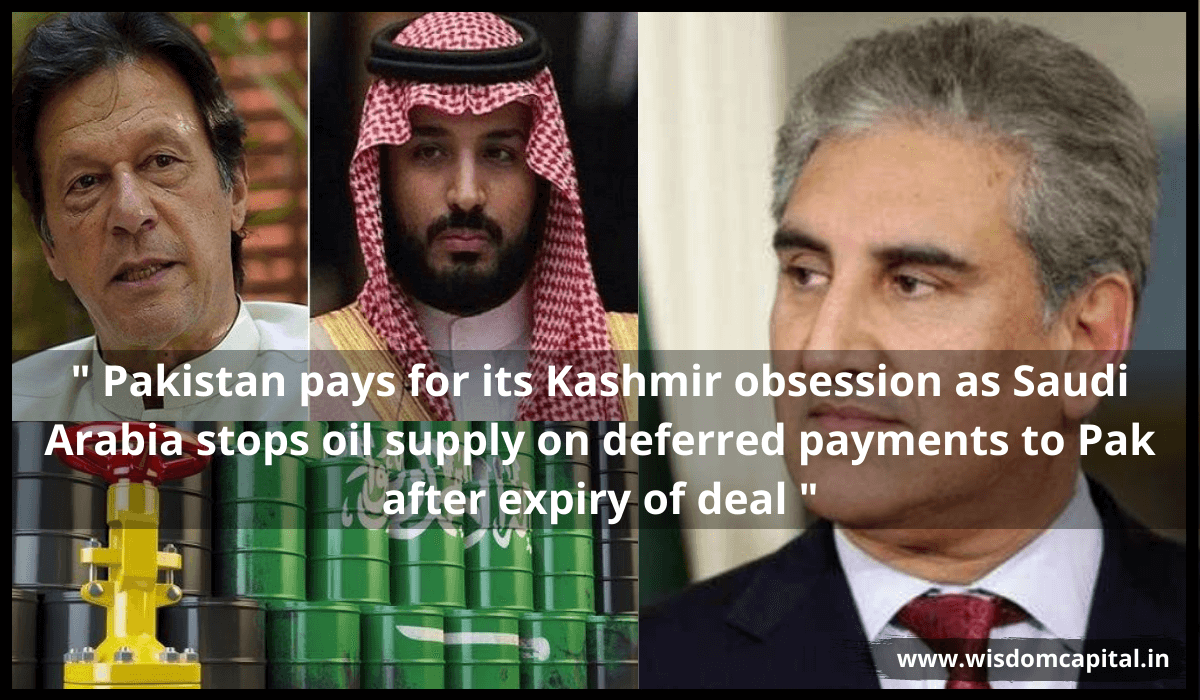 Since May, Pakistan has not received the oil due to deferred payments from Saudi Arabia. Under a deal signed between the two countries for a provision of $3.2 billion worth of the fuel under the arrangement had expired two months ago. This particular deal was signed when Crown Prince Muhammed Bin Salman made a visit to Pakistan in February last year.

On November 2018, it was announced that the $3.2 billion Saudi oil facility was part of the $6.2 billion Saudi Arabian package to help Pakistan’s external sector woes, according to few media reports.

Petroleum Division spokesperson Sajid Qazi said, “The efforts are being made by the Finance Division to renew the facility ever since the agreement expired in May.”

After the abrogation of Article 370, Pakistan continuously insisted on the Organisation of Islamic Countries (OIC) to support its stand on the Kashmir issue. However, it has created a rift in relations of both the countries.

Saudi Arabia is interested in enhancing the partnership with India and hence, has not shown any interest in convening a stand-alone meet on Kashmir.

The previous week Pakistan’s foreign minister Shah Mehmood Qureshi asked the OIC to stop the meeting of the group’s Council of Foreign Ministers on Kashmir.

Qureshi had told local media: “I am once again respectfully telling OIC that a meeting of the Council of Foreign Ministers is our expectation. If you cannot convene it, then I’ll be compelled to ask Prime Minister Imran Khan to call a meeting of the Islamic countries that are ready to stand with us on the issue of Kashmir and support the oppressed Kashmiris.”

The OIC is a group of 59 Islamic nations in which Saudi Arabia holds a bigger share. Even Indonesia, the country with the largest Muslim population has backed out citing that it is India’s internal affairs, as per media reports. Various other countries have also not responded to Pakistan’s initiative led by its permanent representative (PR) at the UN.

Experts are of the opinion that Pakistan’s aggression on the Kashmir policy, in the OIC forum, could now dissuade the Memorandum of Understanding (MoU) signed by Saudi Arabia in the previous year.