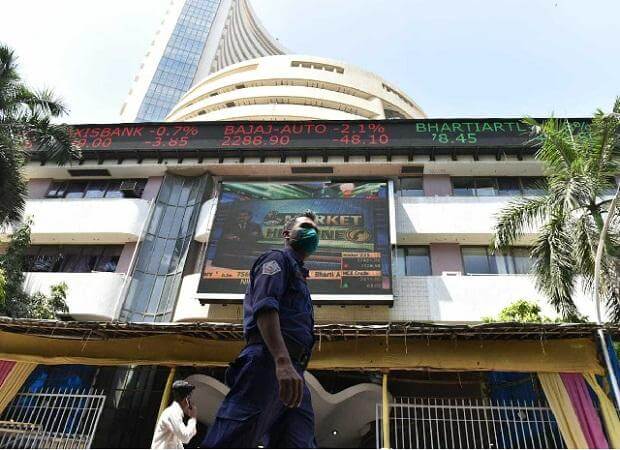 The benchmarks dropped sharply Tuesday , over 3 per cent, tracking weak global markets, following a historic overnight plunge in US crude oil that amplified the blow to the global economy from the coronavirus-led lockdowns.

Volatility index India VIX rose over 4 per cent to 45.34 levels.

In the 30-share Sensex pack, 27 closed in the red, with IndusInd Bank being the top laggard – its stocks fell as much as 12.3 per cent – followed by Bajaj Finance, ICICI Bank, Axis Bank, Mahindra & Mahindra, Tata Steel and ONGC with their shares down as much as 9.04 per cent.

On NSE, besides Nifty Pharma, all sub-indices closed lower with Nifty Private Bank, Media, Metal, Auto, and Bank slipping up to 6.3 per cent.

Oil & gas stocks slipped during the session after the market price for US benchmark West Texas Intermediate crude oil plunged deep into negative pricing for the first time in history on Monday, closing at minus $37.63 after oil producers ran out of space to store the oversupply of crude left by the coronavirus pandemic.

The price of US crude oil plunged from $18 a barrel to -$38 in a matter of hours, as growing stockpiles of crude threatened to overwhelm storages and forced oil producers to pay buyers to take the barrels they could not store.

Tuesday , oil prices rebounded above zero, with the US benchmark for May changing hands at $1.10 a barrel.

As oil traders turned their focus to trading oil for delivery in June, crude prices began to rise again Tuesday .

The rapid oil market fall of recent weeks had reached fever pitch yesterday as traders reached their last day to trade crude for delivery in May before the contracts expire. The deadline caused a collapse in prices as desperate oil traders with more crude than storage space were forced to take action.

At his daily White House briefing, US President Donald Trump described the negative price as a “short-term problem”. He said the country was filling up its strategic reserves: “If we could buy it for nothing, we’re gonna take everything we can get,” he said.

Back home, IT stocks crashed after President Trump announced a temporary suspension of immigration into the US. The Nifty IT index was down nearly 3.5 per cent to 12,409 levels, with all the 10 constituents ending in the red.

Global stocks were sent into a spiral down effect as majority of the world woke up to the news of collapsed WTI crude prices.

MSCI’s All Country World Index, which tracks stocks across 49 countries, fell 0.8 per cent, while European stock markets tracked their Asian counterparts lower, with the pan-European STOXX 600 index down nearly 2 per cent in early deals.

Meanwhile, the rupee closed lower by 30 paise at 76.83 (provisiona) against the US dollar, with fores traders stating that the decline in the Indian currency was largely due to sharp drop in oil prices and stronger greenback which edged higher past the 100 level mark.