Nifty’s price-earnings foresee Indian equities most expensive after the US & Japan; Centre reaffirms on no relaxations of the internet restrictions in J&K 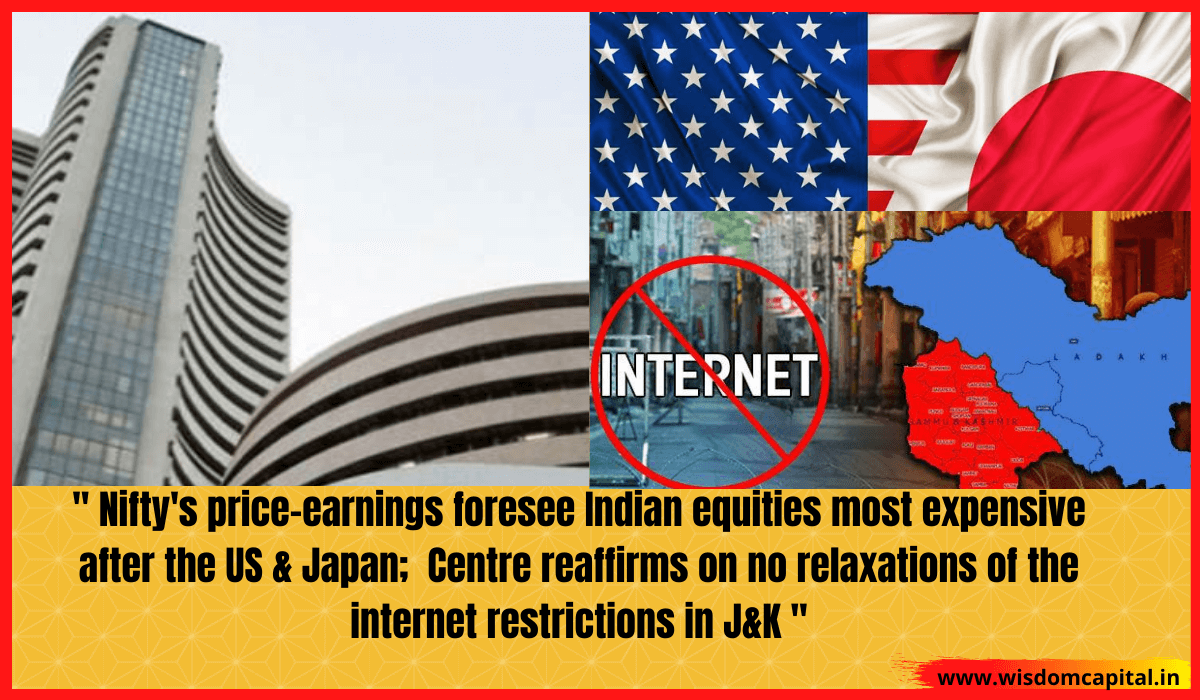 Nifty’s price-earnings foresee Indian equities most expensive after the US & Japan; Centre reaffirms on no relaxations of the internet restrictions in J&K

Nifty’s current price-earnings P/E for FY22 estimates around 17, which is 21 per cent higher than the long-term average of 14 for two-year forward P/E. Based on these two-year forward equity numbers, Indian equities are most expensive after the US and Japan.

As per Bloomberg data, Nifty 50’s P/E based on FY21 earnings depicts a 15-year high of 20.6. The numbers signify 34 per cent higher long-term average of 15.2 which also includes the fall of the Nifty earnings by 10 per cent in the year. This comes when the analysts are considering FY22 estimated earnings which are expected to grow double digits.

Nifty 50 earnings are foreseen to fall by 10 per cent in 2020 but are also seen to receive a sharp recovery of 33 per cent in 2021, as per Bloomberg consensus. Also, several stocks are being re-rated due to early expectations irrespective of earning downgrades.

The bench for the restoration of 4G internet service in J&K has fixed its next hearing on August 7.

In a recent tussle between Centre and NGO Foundation of Media Professionals on the restoration of 4G internet services, Governor GC Murmu told a daily newspaper on Tuesday, “We have been making representation for this… I feel that 4G will not be a problem. I am not afraid of how people will use this. Pakistan will do its propaganda, whether its 2G or 4G. It will always be there. But I don’t see an issue.”

The bench overseeing the matter is headed by Justice NV Ramana. While the LG of J&K has no issues in the restoration of 4G services in the state, Senior Advocate Huzefa Ahmadi on behalf of the NGO wants Solicitor Tushar Mehta to look into the request. Attorney General KK Venugopal said that he will have to verify the details.

High-speed internet services has been suspended in the state of J&K since August last year. However, Governor Murmu’s statement has changed off lately. In the administration’s earlier statement, there was an outright dismissal of the NGO’s plea of restoration of 4G services. They pointed out that high-speed internet services would enable the spread of fake news, rumours, transfer of heavy files rendering terror outfits in planning attacks.