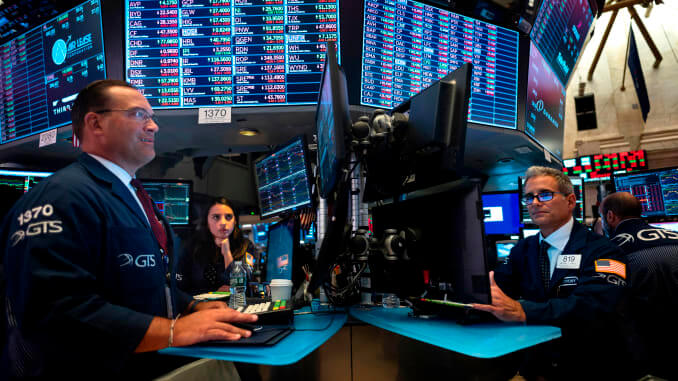 Domestic equity indices opened on a high note as select industries resumed work while news reports indicated that the Centre is giving final touches to an economic stimulus package.

But trading soon turned volatile with Nifty and Sensex both moving in red and green territory.

Erasing early gains and tracking weakness from global key indices and traded on a tepid note, at the close, BSE flagship Sensex ended on a flat green note while NSE benchmark Nifty  ended in a flat red note.

Tata Motors, Infosys, HDFC Bank twins were the top performers while Hindalco and Infratel were the top laggards.

HDFC Bank was the top gainer, rising around 4 per cent, after the bank’s net interest income (NII) grew 16.2 per cent YoY at Rs 15,204 crore in Q4FY20, exceeding market expectations. Infosys, surged 3.75 per cent, while Sun Pharma was up 3.6 per cent.

Sectorally, the Nifty Metal index closed over 3 per cent lower at 1,758 levels. Out of 15 constituents, 13 ended in the red and just two in the green after the Indian Steel Association (ISA) said Indian steel demand is expected to fall to multi-year lows in 2020, hit by slowdowns in the construction, automotive and rail sectors as India fights the coronavirus with an extended lockdown.

Asian benchmarks were in the red earlier today on weak oil prices that collapsed to more than two-decade lows on low demand data and storage facilities reaching their limits. Investors remained cautious over upcoming earnings reports and economic data.

Meanwhile, after the government’s decision to amend the foreign direct investment(FDI) policy to block investments from companies based in countries sharing borders with India including China under the automatic route, the Chinese Embassy criticised India’s change in stance in the wake of the coronavirus pandemic.

A Chinese embassy spokesperson today said that India’s new norms for FDI from specific countries violate the WTO’s principle of non-discrimination and are against the general trend of free trade.

The news of the People’s Bank of China raising its stake in HDFC had been met with a lot of suspicion which resulted in speculation that Chinese companies could try and possibly takeover Indian companies during this time of the Covid-19 pandemic.

Incidentally, this move by India is not the first by a country as Australia and several European nations have already put in place plans and concrete measures to stop such opportunistic takeovers/acquisitions.