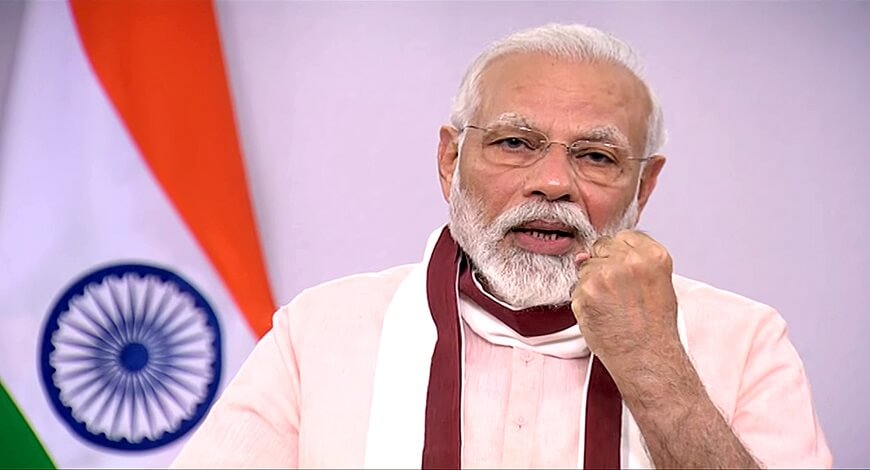 Prime Minister Narendra Modi announced on Tuesday a $266bn or Rs 20 trillion stimulus package equivalent to 10 per cent of the country’s gross domestic product that will focus on land, labour, small and medium-sized business and cover all stakeholders from farmers to entrepreneurs to weather this extraordinary global health crisis.

In a televised address to the nation, the Prime Minister said that the package will work as an important stimulus for a self-reliant India.

He added that India’s self-reliance will be based on five pillars economy, infrastructure, a technology-driven system that will fulfil the 21st-century dreams, demography and immense demand.

This stimulus is for India’s cottage industry, home industry, small-scale industry, MSMEs, which is a source of livelihood for millions of people, the PM said.

Modi stated that the package is for the labourers and the farmers of the country who are working day and night for the countrymen in every situation, every season. It is for the middle class that pays taxes honestly and contributes to the development of the nation and for Indian industries, which are determined to provide a fillip to the economic potential of India.

He also said that India needs to strengthen the supply chain to boost demand.

And the stimulus package could be exactly what Indian markets were yearning for.

Indian markets started majorly bullish on Wednesday, bucking the bearish global trend, as investors were optimistic over the announcement of the economic stimulus package.

Following the PM’s address, the Nifty contracts traded on the Singapore Exchange, usually seen a precursor to the Indian stock market’s reaction, rose 5 per cent, while the American depository receipts (ADR) of Indian companies added between 3 per cent and 10 per cent.

Modi noted that this package, taken along with earlier announcements by the Centre during the pandemic and decisions taken by Reserve Bank of India, is to the tune of ₹20 lakh crore, which is equivalent to almost 10 per cent of India’s GDP. He said that the package will provide a much needed boost towards achieving ‘Atmanirbhar Bharat’.

This would take into consideration the fiscal stimulus package of Rs ₹1.70 lakh crore announced earlier by Union Finance Minister Nirmala Sitharaman, the RBI package and the various tax sops announced in the Union Budget.

The details of the package will be announced by the Finance Minister, he said.

According to experts, measures covering half of the Rs 20 lakh crore have already been announced by the Finance Minister and RBI.

And, this is more than expected, for some. On May 9, the Confederation of Indian Industry called for a stimulus package of Rs 15 lakh crore or 7.5 per cent of the GDP to tide over the impact of the nationwide lockdown.

While the size of the package is indeed huge, it’s the implementation which matters, noted market enthusiasts and markets will constantly assess those to determine the future course.

Meanwhile, Modi also said that the fourth phase of the lockdown will take into consideration the suggestions from the states and will look much different from the last three lockdowns.