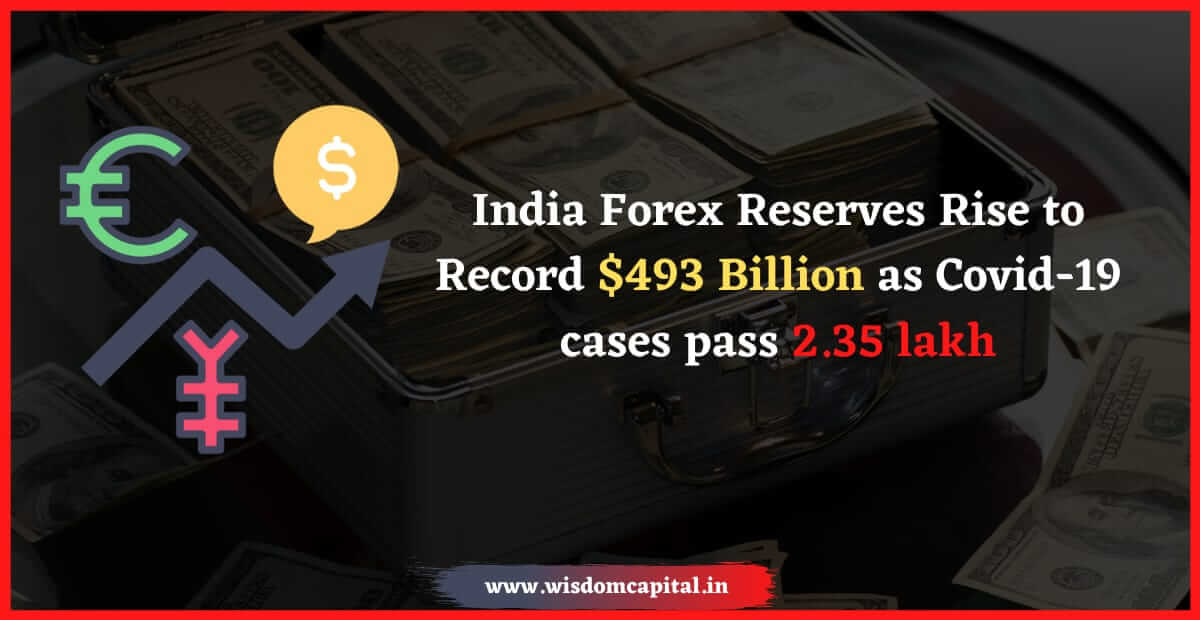 Even as the country faces the economic impact of the COVID-19 pandemic, India’s foreign exchange reserves rose by $3.43 billion to an all-time high of $493.48 billion for the week ended May 29 on a handsome accretion of the core currency assets, the central bank said on Friday.

According to the Reserve Bank of India, the reserves, counted as a key strength, had surged by $3 billion to new high of $490.044 billion in the previous week.

Data from the central bank also revealed, during the week ended May 29, foreign currency assets – a major component of the overall reserves – jumped by $3.50 billion to $455.21 billion.

The data found that total value of the gold reserves continued to fall and were at 32.68 billion, lower by $97 million compared to the previous week.

Meanwhile, the number of Covid-19 cases in India surged to 2.35 lakh on Friday, taking the nation to the sixth spot worldwide overtaking Italy, while the number of deaths crossed 6,600, data from state governments and America’s Johns Hopkins University revealed. In terms of the number of cases, India had surpassed China – where the virus emerged in December 2019 – for the ninth spot last week.

In its latest update on Friday morning, the Union Health Ministry dashboard showed the number of Covid-19 cases in India has risen to 226,770 and the death toll is at 6,348.

Although India’s recoveries have risen to more than 1.12 lakh, the country still has more than 1 lakh active cases. The cases have seen a sharp rise, by 8,000 or more, for several days now.

The number of states with four-digit or bigger numbers has seen a two fold increase since May 1 when the Government permitted the movement of migrant workers in Shramik trains from big cities to their native places. Some of these states have seen cases rising more than 10-fold.

The Centre is currently in the process of easing restrictions in place since March 25 as part of a Government imposed nationwide lockdown to curb the spread of the novel coronavirus.

With the Health Ministry’s data showing a dramatic rise in the number COVID-19 cases and deaths in recent days, Congress leader Rahul Gandhi on Friday criticised Prime Minister Narendra Modi’s government for its response to the coronavirus crisis, blaming it for a “failed lockdown” as he compared India’s nationwide shutdown to those in other countries.

Gandhi tweeted five graphs that showed how shutdowns in European nations had helped bring down the number of daily cases but in India, the rise continued unabated and the decision to lift the lockdown restrictions come at a time when the increase in the number of cases is at an all-time high.

For weeks, Gandhi has critiqued the Centre’s handling of the pandemic, the subsequent lockdown and the devastating effects on India’s poor, especially migrant workers.

Despite the Delhi government allowing construction work to resume last month, the government agencies involved are struggling to find construction workers. Agencies state that a majority of the labour workforce in Delhi hail from Uttar Pradesh, Bihar, Rajasthan, Jharkhand. Government agencies involved in five major infrastructure projects in Delhi said that the strength of this workforce has dipped by 50-75 per cent, resulting in delays.