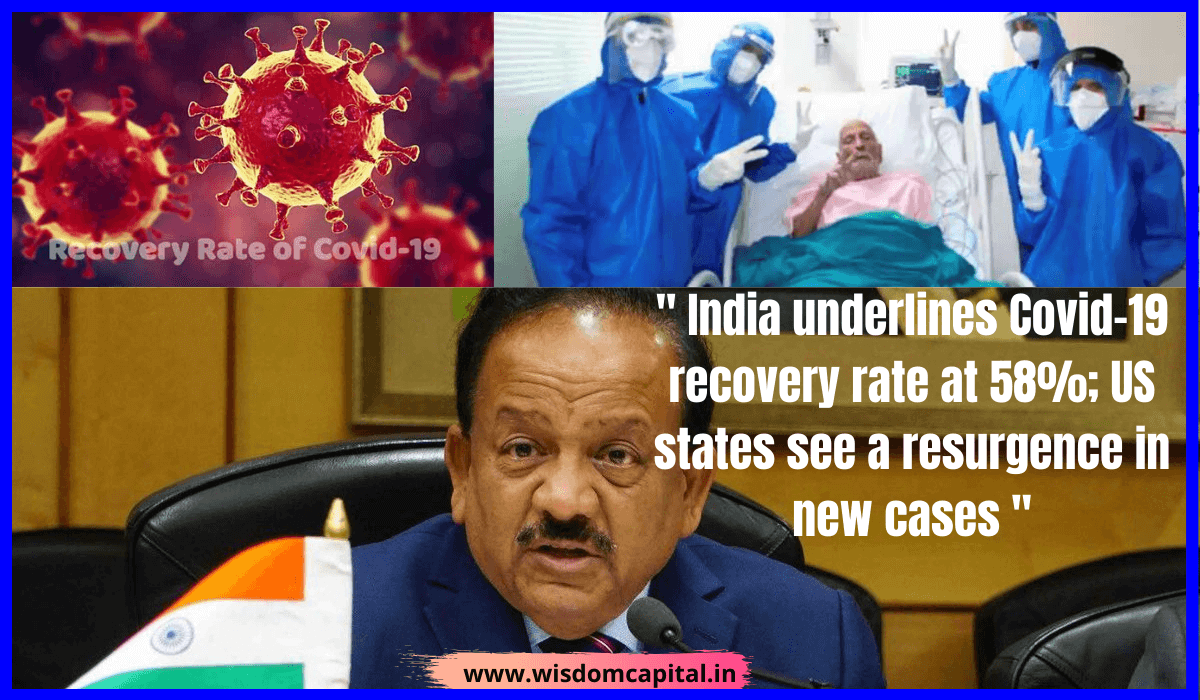 With the Union Health Ministry today providing a more optimistic appraisal of the state of affairs in the country’s fight against the Covid-19 pandemic, Health Minister Dr Harsh Vardhan underlined India has 58 per cent recovery rate from the disease. This means nearly 300,000 recoveries out of the total caseload of 5,08,953 recorded so far since the outbreak.

The ministry also pointed out that India’s mortality rate due to the virus was only 3 per cent and the doubling rate was close to 19 days, a big departure from 3-days recorded before a nationwide lockdown was imposed in the country on March 25.

According to the Indian Council of Medical Research (ICMR), India has tested 79,96,707 samples with 2,20,479 samples being tested yesterday, the highest in a day since the beginning of the outbreak. Despite the increasing number of tests being conducted, India ranks 139th in terms of tests conducted per million of the population. India has conducted 5,795 tests per million of the population which is significantly low in comparison with the United States- 94,733 tests/million, Brazil- 13,766 tests/million and Russia- 128,140 tests/million.

India is currently the fourth worst hit nation in terms of total number of infections with the United States, Brazil and Russia faring even worse on that count.

However, if one were to look at the total number of casualties, India ranks 8th on the list with Russia being the only country with fewer deaths but a higher number of cases than India. Death toll in India is at 15,685, according to the latest health ministry data released on Saturday.

Cases surge in the United States

The US registered 45,242 new cases of coronavirus yesterday, the largest single-day jump of the outbreak, according to a Reuters tally, bringing the total number of Americans who have tested positive to at least 2.48 million.

Around 125,000 Americans have died of coronavirus, the highest known death toll from the highly infectious disease in the world.

The new record for positive coronavirus tests comes as several states including Texas, Florida, and California at the centre of a new spike in infections issued new restrictions on businesses. While Texas reversed reopening plans, closing bars and capping restaurant capacity at 50 per cent, Florida, which shattered its daily record for new cases once again, banned drinking at bars.

Top US infectious disease expert Dr Anthony Fauci says the nation has a “serious problem” as 16 states reel from a jump in Covid-19 cases.

Despite the grim reports and the virus infecting his staff, US President Donald Trump said on Friday the United States was coming back from the Covid-19 crisis, which brought large parts of the economy to a grinding halt and left millions without work.

He said that the US slowed the spread, flattened the curve and saved lives.

Blaming much of the rise on positive test results from asymptomatic young people in the southern states, he said: “In Texas and Florida, it’s being seen more young people, under the age of 35, are testing positive. In many cases they have no symptoms.”

The vice-president added that while they may be at lower risk of serious symptoms, they should “take countermeasures” and listen to state governors’ advice.