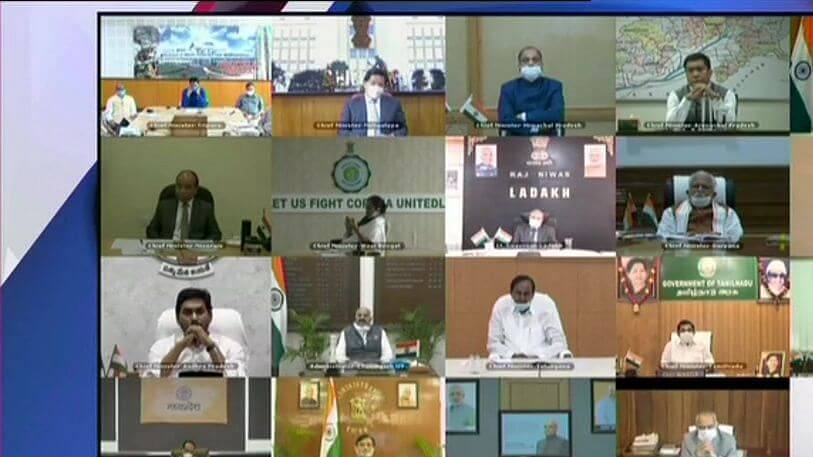 Prime Minister Narendra Modi has hinted that stay-at-home orders in India may be extended beyond May 17, as he held a marathon meeting with chief ministers on Monday to discuss the roadmap for India’s response to the COVID-19 pandemic.

According to sources, Modi told the CMs that the lockdown will have to continue, but anti-virus restrictions will be further eased to increase public activity gradually, while adhering to guidelines.

He asked the chief ministers to share by May 15 a broad strategy on how they want to deal with the various nuances during and after the easing of restrictions in their states.

The PM also suggested doing away with red zone classification for districts as suggested by some chief ministers, including Delhi Chief Minister Arvind Kejriwal.

Modi said that the entire district may not be declared as a red zone, and stringent curbs on movement could only be limited to containment areas.

To fight the spread of COVID-19, the Health Ministry had divided the country into red, orange and green zones based on the number of cases and the trajectory. While orange and green zones saw several loosening of restrictions from May 3, when the third phase of the lockdown began, most curbs were not lifted from red zone districts.

The PM also assured the states that the Centre was working to reopen the economy and said suggestions given by the chief ministers for its revival were being given due consideration.

Meanwhile, the Indian Railways resumed passenger train operations today, nearly two months after services were stopped due to the nationwide lockdown imposed as a precautionary measure to contain the spread of the pandemic.

As per the release, the PM  said resumption of train services was needed to rev up the economic activity. But, he made it clear that services on all routes will not be resumed and that only a limited number of trains would ply for now.

According to data shared by the Ministry of Health and Family Welfare, the total number of COVID-19 cases in India stand at 70,756, with 46,008 active cases and 22,454 cured/discharged patients. As many as 2,293 people have died and one was migrated. The recovery rate in the country stands at 31 per cent, Health Ministry official said.

Maharashtra continued to report about 1,000 cases for the sixth consecutive day, while the pandemic spread to Tamil Nadu, which saw 798 new cases in highest single-day surge.

India introduced the world’s most stringent lockdown measures in late March. The move brought uncertainty to an already grappling economy, with businesses struggling to stay afloat and its owners finding it tough to pay salaries to employees, while shutting their doors to customers.

As fears of a second wave of coronavirus cases spooked investors across Asia, Indian benchmarks started on a weak note today. The S&P BSE Sensex index slipped as much as 2.02 per cent to hit 30,922.33, and the broader NSE Nifty 50 benchmark declined to as low as 9,059.75.