India-China clash: Modi says soldiers’ sacrifice ‘will not be in vain’ 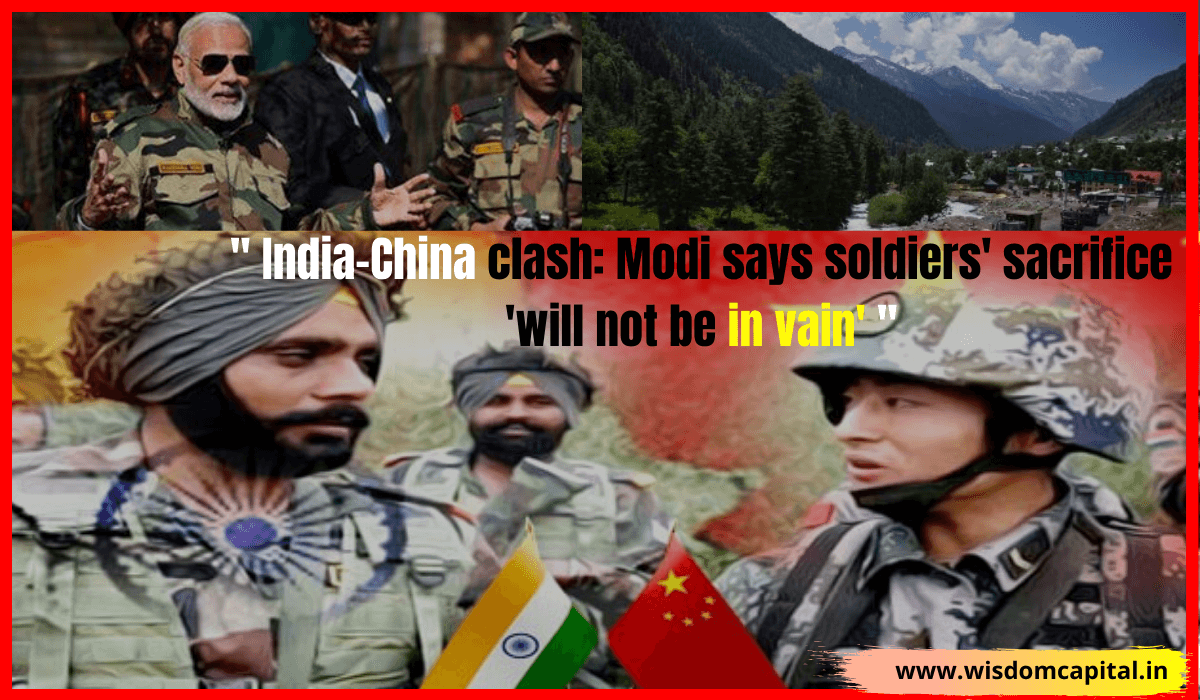 India-China clash: Modi says soldiers’ sacrifice ‘will not be in vain’

PM Modi warned in a strong message to China that India, while peace-loving, is capable of giving a fitting reply if provoked.

PM Modi said India would be “proud that our soldiers died fighting the Chinese.” Modi, who had been accused by opposition leaders like Congress’s Sonia Gandhi and Rahul Gandhi and former Prime Minister HD Deve Gowda of silence on the month-long tension with China and Monday’s killings, observed two minutes of silence in tribute to the 20 soldiers who died for the country before beginning a scheduled meeting with Chief Ministers on the Covid-19 pandemic.

The Prime Minister has called an all-party meeting on June 19 (Friday) to discuss the situation at the India-China border after the Ladakh face-off. Presidents of political parties have been called for the virtual meeting at 5 pm on Friday.

According to sources in the Indian army, up to 45 Chinese soldiers have been killed or injured in the combat at Galwan Valley.

Initially, the Indian army confirmed a colonel and two soldiers had died. It later said that “17 Indian troops who were critically injured in the line of duty” and died from their injuries, taking the “total that were killed in action to 20”.

As per new details that have emerged, on Monday, June 15, a small Indian patrol party moved to remove a Chinese tent in the Galwan river valley at 15,000 feet. China had agreed to remove the tent after talks between Lt General-rank officials of both sides on June 6.

The Chinese removed the tent after the meeting but they again pitched it back at the same place. After the tent was reenacted, India’s Commanding Officer along with his troops went to hold talks with the Chinese to get it removed on Monday.

The Chinese side resorted to the scuffle as they were fully prepared and took advantage as the Indian team was unarmed. However, the soldiers when attacked by Chinese troops by iron rods, sticks studded with nails and batons, snatched the same from the Chinese Army and retaliated.

No bullets were fired in the clash.

Meanwhile, India on Wednesday conveyed its protest in “strongest terms” to China during a telephonic conversation between external affairs minister S Jaishankar and his Chinese counterpart Wang Yi.

Following the telephonic conversation, a statement by the Ministry of External Affairs said that India had conveyed to China that the Galwan Valley development will have a “serious” impact on the bilateral relationship. The statement added that the need of the hour was for the Chinese side to reassess its actions and take “corrective” steps.

The ministry’s statement pointed out that according to the agreement reached by the Senior Commanders on June 6, the two sides had agreed for de-escalation and disengagement, which was being followed through regular meetings between ground commanders last week before the Chinese side sought to erect a structure.

The statement further said that at the conclusion of the discussion, it was agreed that the overall situation would be handled in a responsible manner, and both sides would implement the disengagement understanding of June 6 sincerely. Neither side would take any action to escalate matters and instead, ensure peace and tranquillity as per bilateral agreements and protocols.