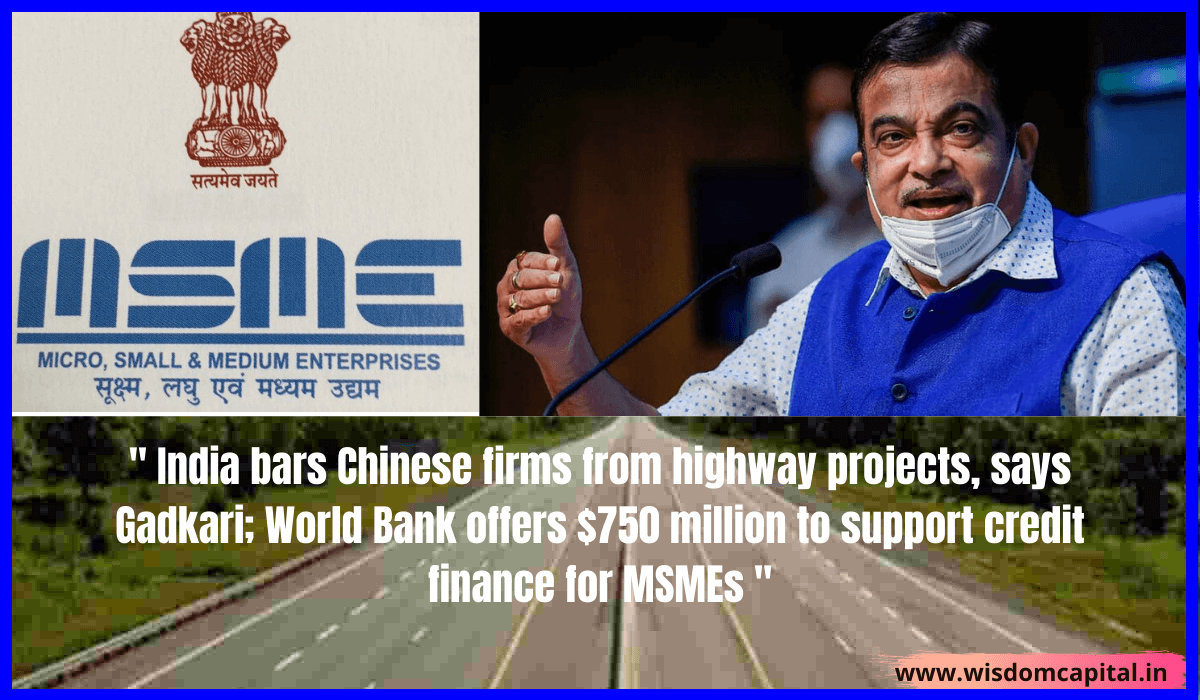 India will not permit Chinese firms to participate in highway projects, including those through joint ventures, Union Minister for Road Transport & Highways; Shipping; and Micro, Small and Medium Enterprises said on Wednesday amid escalating tensions with China.

Gadakri also said the government will ensure that Chinese investors are not entertained in various sectors like MSMEs.

The senior minister’s comments assume significance against the backdrop of the border dispute between India and China in Ladakh that also saw the death of 20 Indian Army personnel last month.

In a significant move for India’s coronavirus-hit small businesses, the World Bank has granted $750 million to support increased flow of finance into the hands of micro, small, and medium enterprises (MSMEs) in India, badly hit by the Covid-19 pandemic. The package will support the MSME package announced by the government under its Atma Nirbhar Bharat Abhiyaan or self-reliant India programme.

In a statement, the multilateral lending institution said that the World Bank’s MSME Emergency Response programme will address the immediate liquidity and credit needs of some 1.5 million viable MSMEs to help them withstand the impact of the current shock and protect millions of jobs.

India’s MSME sector which contributes 30 per cent of India’s GDP and 40 per cent of exports is currently facing severe stress. The sector, which employs about 150-180 million people, is now burdened with cancelled orders, loss of customers and supply chain disruptions  that has led to a sharp fall in revenues. This dearth of cash flow is exacerbated by constraints to accessing finance, potentially leading to solvency issues. The broad-based loss of cash flows has given rise to a chain of non-payments throughout the economy, including to the financial sector.

Junaid Ahmad, World Bank Country Director in India, said that MSMEs are central to India’s growth and job creation and will be key to the pace of the nation’s economic recovery, post Covid-19. The immediate need is to ensure that the liquidity infused into the system by the Centre is accessed by MSMEs. Equally significant is to strengthen the overall financing ecosystem for MSMEs. He added that the operation aims to achieve both these objectives by furthering the role of NBFCs and SCBs as effective financial intermediaries and leveraging fintech to broaden the reach of finance into the MSME sector.

The World Bank has so far committed $2.75 billion to support India’s emergency Covid-19 response, including the new MSME project. The first $1 billion emergency support was announced in April for immediate support to India’s health sector, followed by another $1 billion project, which was approved in May, to increase cash transfers and food benefits to the poor and vulnerable, including a more consolidated delivery platform – accessible to both rural and urban populations across state boundaries. The $750 million loan for MSMEs from the International Bank for Reconstruction and Development (IBRD) has a maturity of 19 years including a 5-year grace period.