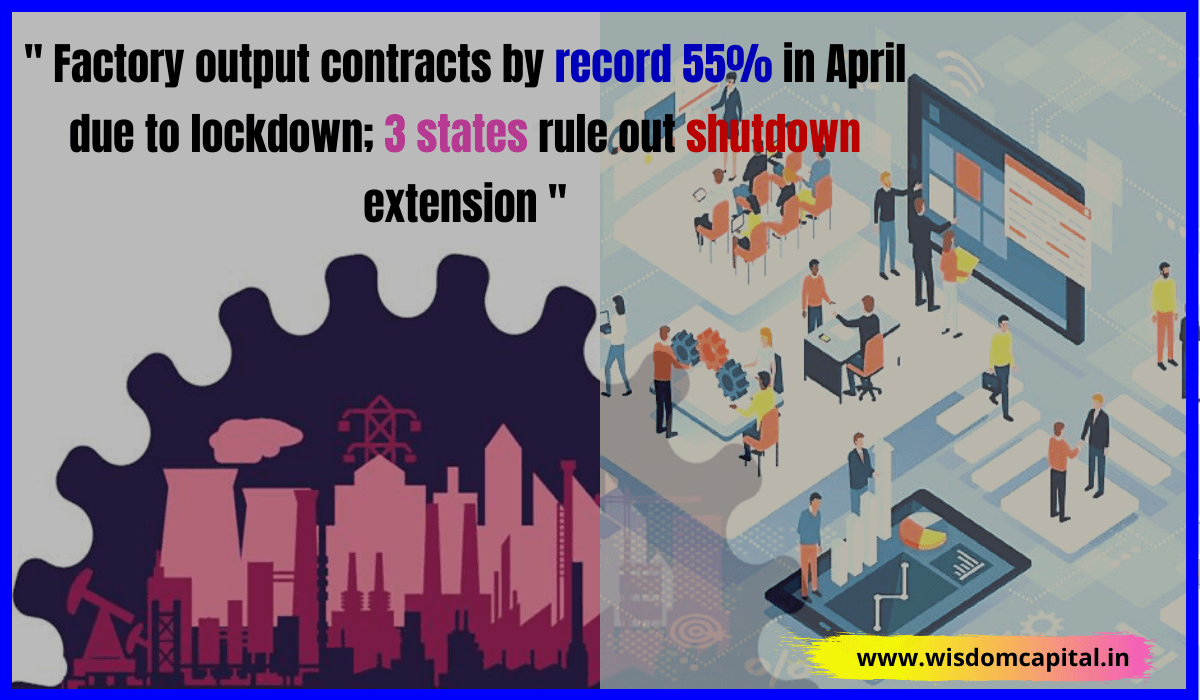 The Index of Industrial Production (IIP), a way of measuring factory output, declined by a record 55 per cent in April, when compared to the same period a year ago, as the Covid-19 pandemic and the subsequent economic shutdown adversely affected manufacturing.

The index had declined by 18 per cent in March, according to revised data for that period.

Numbers for April revealed production declined by 64 per cent, while mining fell by 27 per cent and electricity by 26 per cent.

Manufacturing of primary goods slipped by 27 per cent, while consumer non-durables contracted by 36 per cent.

The nationwide lockdown lasted the entire month of April and a large part of May before the Centre started unlocking some regions where the pandemic was not widespread.

In a statement, the government said that the nationwide lockdown has had an impact on goods being produced by the establishments during the month of April, 2020, where a number of responding units have reported zero production. Consequently, it is not correct to compare the IIP of April, 2020, with previous months, and users may like to observe the changes in IIP in the coming months.

With Covid-19 cases rising sharply across India, at least three states have brushed aside rumours on the social media surrounding the lockdown extension.

At present, the lockdown is limited only to containment zones across the country and will continue till June 30. As part of the phased reopening, called Unlock 1, a large number of social, economic, religious and sports activities are permitted by the Union Ministry of Home Affairs.

In view of reports that the Uddhav Thackeray government planned to withdraw the lockdown relaxations in Maharashtra, the chief minister on Friday clarified that no such decision has been taken.

Stating that some media reports were creating confusion in the minds of people, Chief Minister Uddhav Thackeray said the state government was easing the lockdown restrictions in phases to restart the economy.

The Chief Minister’s Office (CMO) also took to social media platform Twitter to clarify speculations about the lockdown being reimposed.

He however added that the lifting of curbs does not mean unnecessary crowding and violating discipline of keeping distance and hygiene.

A day after the central government announced loosening of restrictions  under “Unlock 1”, the state government had declared the lockdown till June 30, but with a slew of relaxations and phase-wise resumption of activities under “Mission Begin Again”.

In Tamil Nadu, Chief Minister K Palaniswami also refuted news reports that his government was planning a more stringent shutdown. The CM said false news was being spread over announcing another shutdown and warned of stern legal action on those spreading such rumours.

The Chief Minister’s denial comes days after it was speculation by many on social media platforms about the rapid increase in the number of coronavirus cases and deaths in the state.

Even after the Supreme Court termed the situation in the national capital as “horrific”, the Delhi Health Minister Satyendra Jain made it clear as well that the lockdown would not be extended in the state.