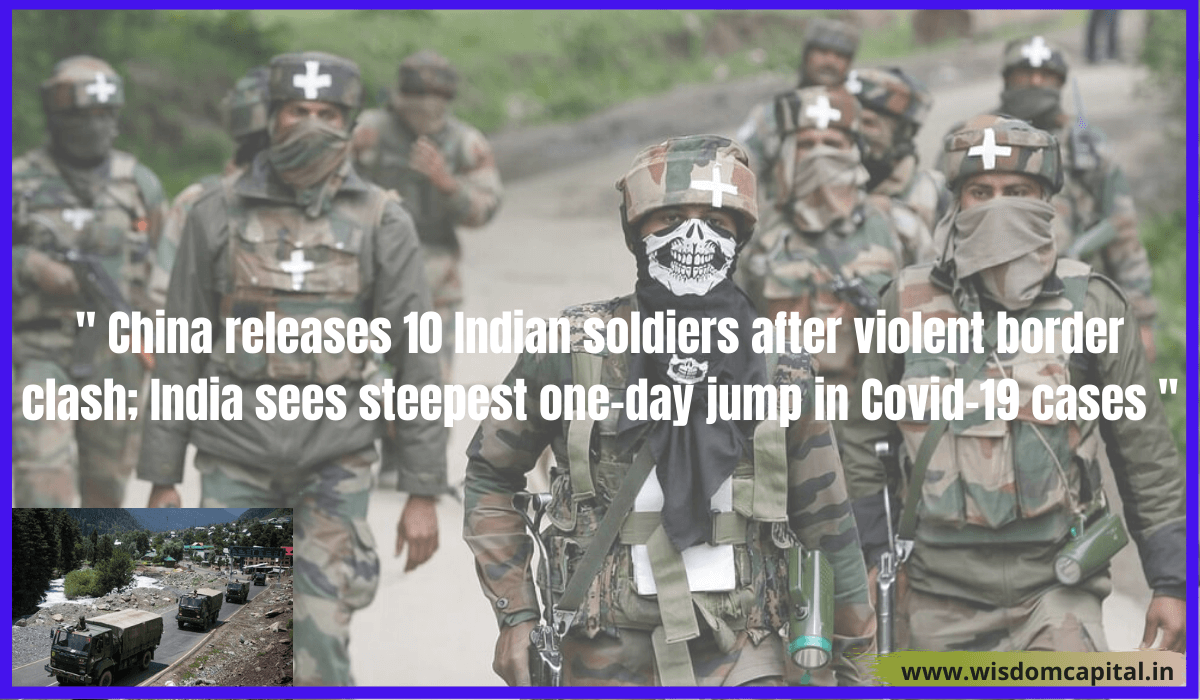 After intense negotiations through diplomatic and military channels, China has freed 10 Indian soldiers detained in the high-altitude border clash of June 15 in the Galwan Valley area of Ladakh, people familiar with developments said.

News agency PTI reported that the people, speaking on condition of anonymity,  said the 10 soldiers, including two Majors, were returned to the Indian side late on Thursday evening, three days after the violent face-off along the Line of Actual Control (LAC) that left 20 soldiers, including a colonel, dead.

These talks were kept tightly under wraps due to concerns for the safety of the soldiers amid the heightened tensions between the two sides, the people said.

An official statement on the release of 10 Indian Army soldiers is still awaited.

So far the Narendra Modi government has made no comment but the Indian army released a brief statement clarifying: “It is clarified that there are no Indian troops missing in action”.

Another media report said an agreement on the release was reached at major general-level talks between the Indian army and China’s People’s Liberation Army.

Indian army sources on Thursday added that a total of 76 Army personnel were brutally assaulted by the Chinese forces on June 15 out of which 18 were seriously injured while 58 of them sustained minor injuries. Sources further said that 18 personnel are undergoing treatment at a hospital in Leh, while 58 are admitted to various other hospitals.

On the Covid-19 front, the pandemic in India grew by the highest number yet again when over 13,000 fresh cases were detected in the last 24 hours. Maharashtra and Delhi recorded the highest spike in cases on Thursday. Uttar Pradesh and Tamil Nadu also witnessed a rise in new infections. The total number of Covid-19 cases in the country jumped to 380,532.

On a positive note, over 2 lakh Covid-19 patients recovered from the deadly infection. More than 52 per cent of the total cocornavirus cases were cured in India.

With the highest number of coronavirus cases, Maharashtra continues to be the worst-hit state in the country. A total of 1,20,504 cases have been witnessed in the state so far, while deaths related to the virus stand at 5,751. As many as 60,838 infected patients have been cured and discharged from the hospitals.

Tamil Nadu, where four districts, including Chennai, is under lockdown, is the second-worst affected state in the country with more than 50,000 cases and 625 deaths. Followed by the national capital, Delhi, which recorded 49,979 confirmed cases and 1,969 deaths, Gujarat saw 25,601 cases and 1,591 deaths while Rajasthan registered13,857 cases, with 323 deaths.

The Centre on Thursday pitched for a unified strategy for Delhi and its satellite cities to fight the Covid-19 pandemic, while the AAP government in the national capital ramped up COVID-19 diagnosis by commencing testing through the rapid antigen method. The satellites towns of Noida, Ghaziabad, Gurgaon and Faridabad have nearly 7,630 cases and together reported 142 deaths.

While reviewing the Covid-19 situation in Delhi-NCR, Union Home Minister Amit Shah said the satellite towns cannot be separated from Delhi in this battle against the disease. The home minister favoured a unified strategy for Delhi-NCR to combat Covid-19, a home ministry source said.