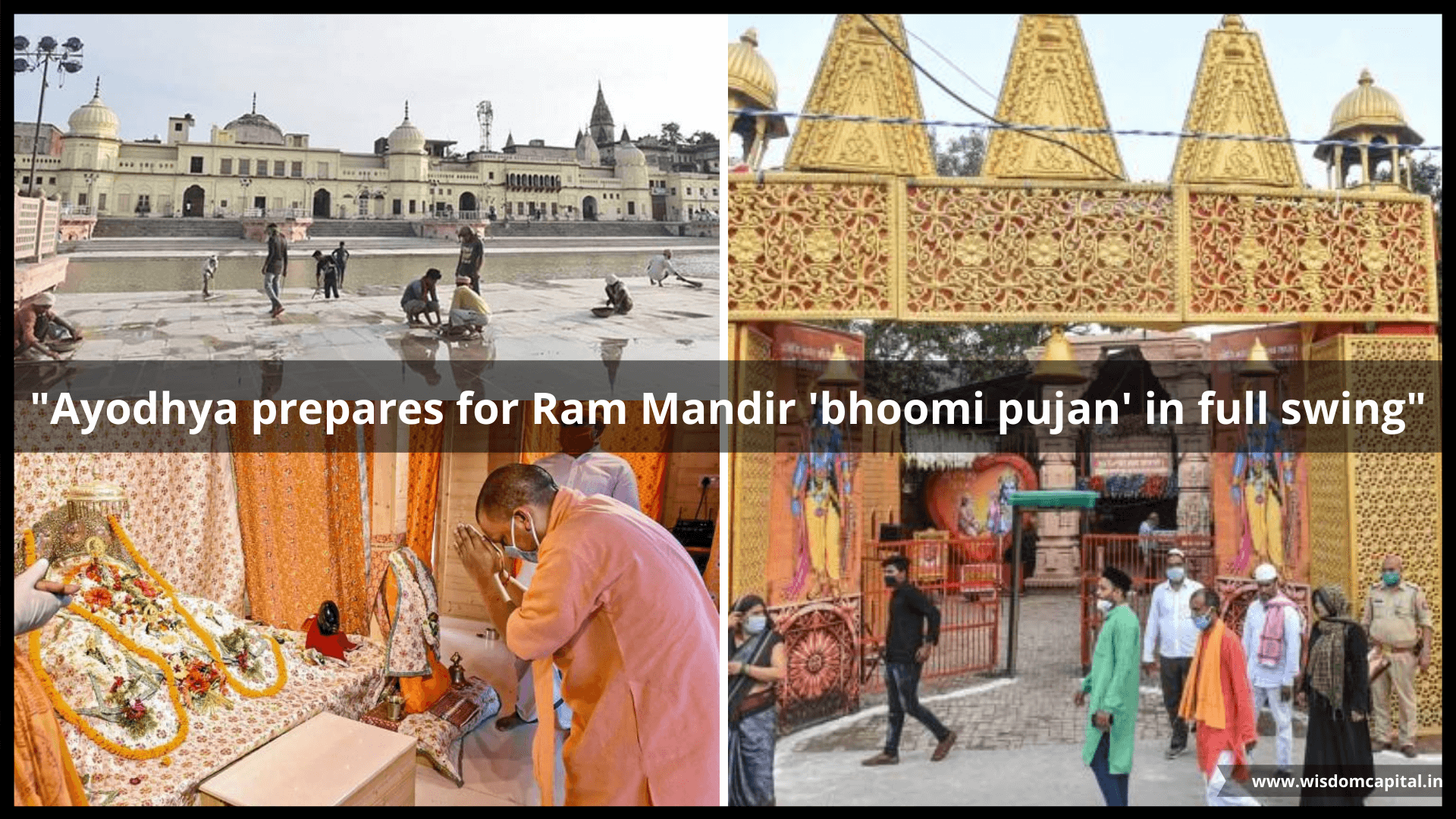 The preparations for Ram Mandir bhoomi poojan have started in full swing from August 3. The rituals began with the ‘Gauri Ganesh Puja’ at 8 in the morning between the chanting of mantras by 11 priests along with ‘Ramayana Path’. The three-day ritual ceremony will culminate with the ‘Bhoomi Pujan’ where the foundation will be laid for the development of Ram Temple by our Prime Minister, Narendra Modi on August 5. The pooja will be performed around 12:15 PM on Wednesday.

Since Hanumanji is regarded as the protector of Ayodhya hence, the puja at Hanuman Garhi is to be performed to seek Lord Hanuman blessings to start the Ram Mandir’s construction work, said Anil Mishra, member of Sri Ram Janmabhoomi Tirth Kshetra Trust. The priests from Kashi, Kanchi, and Delhi will be performing the ‘Gauri Ganesh Puja’. Apart from this, eight priests from Ayodhya, five each from Delhi and Varanasi, and three from Kamikochi in Tamil Nadu will be performing the auspicious rituals at Ram Janmabhoomi for the temple’s construction.

The Ram Janambhoomi ceremony on August 5 will be attended by various religious leaders and other important dignitaries. But due to the situation of Coronavirus pandemic, the number of people to attend the event has been restricted to maintain the safety and security of everyone. The guest list for the auspicious event includes the names of Prime Minister Narendra Modi, Rashtriya Swayamsevak Sangh (RSS) chief Mohan Bhagwat, chief minister Yogi Adityanath Ji, and UP Governor Anandiben Patel.

The invitation card has been designed with Ram Lalla image and was issued in the name of Mahant Nritya Gopal Das. According to Champat Rai of the Ram Mandir trust, each invitation possesses a security code which won’t allow re-entering the venue due to single-entry security code.

The invitation is only valid for the residents of Ayodhya. The first invite has been shared with Iqbal Ansari, one of the Muslim litigants in the case of Ayodhya. Padma Shri recipient Mohammad Sharif, who has been honoured for cremating 1,000 unclaimed bodies has also been invited for the event.

Chief Minister, Yogi Adityanath told reporters that it is a historic as well as an emotional event since after 500 years, the construction of Ram Temple will start. He also said that it will be the foundation of new India.

The place is within close proximity to Ayodhya and is 130km away from Lucknow. The 4,000 security personnel have been deployed with 75 check posts blocking nearby roads for the safety of each one attending the auspicious event. Since Monday night, the district borders have been sealed for better security.

Meanwhile, the first phase of the new modern railway station in Ayodhya has been announced by the Northern Railways which is stated to be completed by June 2021. This railway station will possess all the modern facilities and will be built on the theme of Ram Temple.