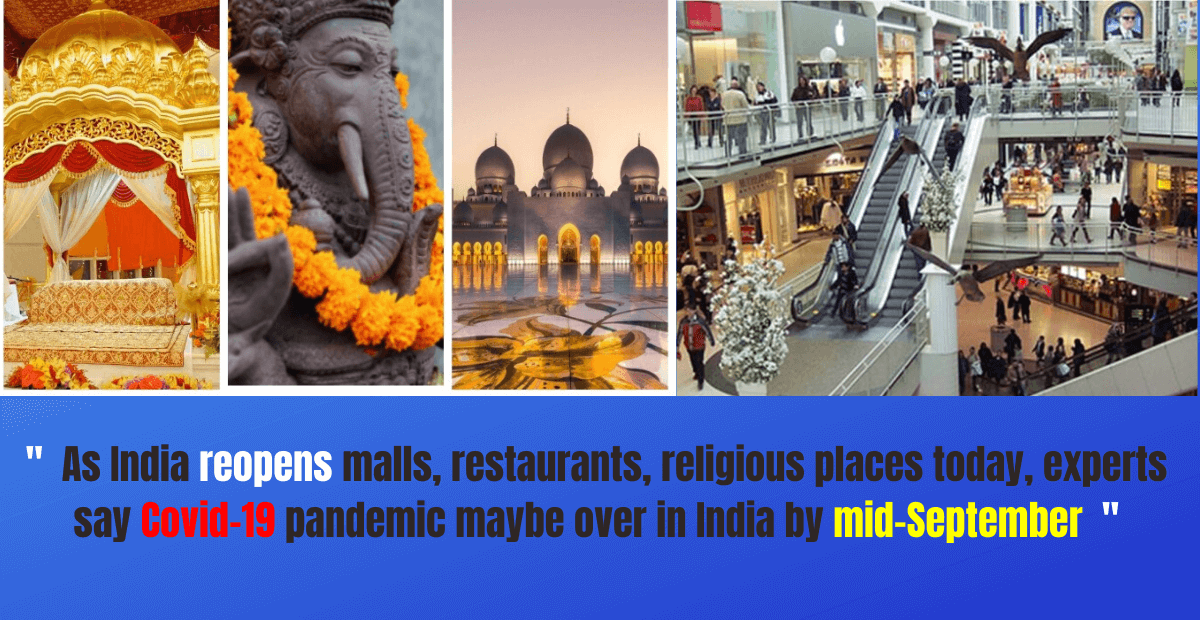 Covid-19 cases in India have passed 2.5 lakh as a rise in infections continued amid increasing relaxations allowed by the Centre following an over two-month nationwide lockdown. Nearly, 7,000 people have died so far in the country.

Shopping malls, places of worship, hotels and restaurants are set to reopen in most states with some measures from today after over two months of lockdown. This could pose new challenges to control the spread of the virus, with the country already surpassing Spain as the fifth worst-hit nation by the virus.

The United States, Brazil, Russia and the United Kingdom are the other countries which have recorded more cases than India. However, the rate of recovery among coronavirus patients is the best in India. The current recovery rate stands at 48.20 per cent.

Union Health Ministry officials have projected that the Covid-19 pandemic may be over in India by mid-September using the Bailey’s mathematical model.

According to a PTI report, the analysis by Dr Anil Kumar, Deputy director General (Public Health) in the DGHS, and Rupali Roy, Deputy Assistant Director (Leprosy) DGHS in the health ministry was published in the online journal Epidemiology International.

Delhi, Mumbai, Kolkata and Chennai  account for nearly 50 per cent of the coronavirus cases in the country, news agency PTI reported. Maharashtra is the worst-affected state followed by Delhi.

Maharashtra reported 3,007 new cases till Sunday, the Centre said, and remains the worst-hit state in the country with 85,975 cases. More than 3,000 people have died so far in Maharashtra. The state has now surpassed China in coronavirus cases, with 83,036 confirmed cases, a health official said.

Maharashtra’s public health department had on June 3 said that the rate of increase of cases in the state has been reducing in the period between May 1 and June 1, adding that it has observed that on June 1, it has come down to less than the national average as well (4.74 per cent).

While the damage to revenues and profits was restricted in the March quarter, India Inc is bracing for a difficult FY 2020-21. Given how the shutdown has crimped cash flows in the June quarter so far and poor forecast on demand, few businesses are able to see where revenues are headed and analysts are trimming earnings estimates across the board.

Critics say the recent surge in cases across the country shows the over two-months long stringent shutdown imposed by the Narendra Modi government, which was meant to give the authorities time to ramp up healthcare facilities and came at huge economic cost, has not worked.

Meanwhile, the Arvind Kejriwal government in Delhi on Sunday night issued a list of documents that would make a person eligible to be treated in either a state-run or private hospital, barring those that provide specialised surgeries.

The documents include voter ID card; bank or post office passbook, ration card, passport, drivers’ license, IT return; latest water, telephone or electricity bill issued to the patient or close relative such as parents or spouse; proof of postal department’s posts received with the patient’s name in the given address; Aadhaar card issued prior to June 7; and any such document issued in the name of any of the parents if the patient is a minor, said the order.

The order, which is signed by Padmini Singla, Delhi health secretary, states that the “private hospitals and nursing homes shall ensure that only bona fide residents of Delhi are admitted for treatment.”Attachments area