Amid pandemic, US bars entry of high-skilled workers through 2020; Ban on H-1B, J1 visas to free up half a million jobs for Americans 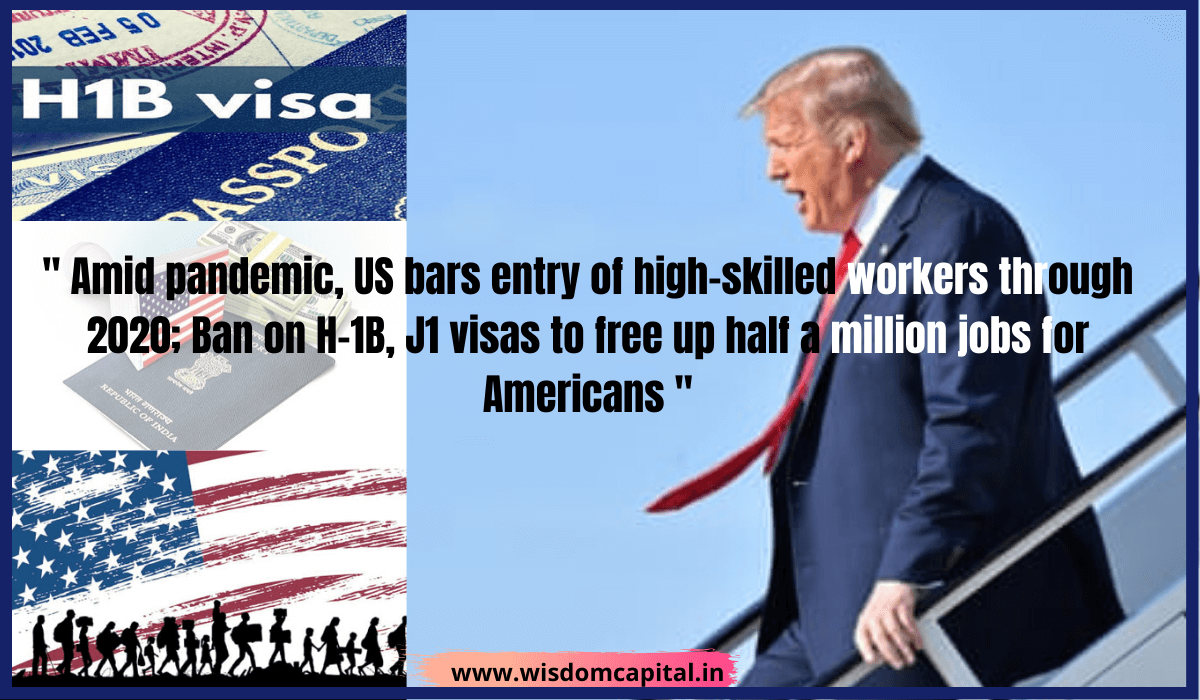 Amid pandemic, US bars entry of high-skilled workers through 2020; Ban on H-1B, J1 visas to free up half a million jobs for Americans

In a move to preserve US jobs amid the economic downturn due to the Covid-19 pandemic, United States President Donald Trump has extended a suspension on green cards issued outside the US until the end of 2020 and added many temporary work visas to the freeze, including the H-1B visas.

The presidential proclamation, issued on Monday, comes despite strong opposition from many businesses as H-1B visas permit employers to hire foreign workers with specialized knowledge and are used heavily by technology companies and multinational corporations.

Trump banned H-1B visas, which is popular among Indian IT professionals, along with other foreign work visas for the rest of the year.

A White House official, on condition of anonymity, told news agency AFP that President Trump is focused on getting Americans back to work as quickly as possible.

According to officials, the restrictions will free up to 525,000 jobs for Americans.

Businesses pressed hard to restrict the changes, but got little of what they wanted, marking a victory for immigration hardliners as Trump seeks to further solidify their support ahead of the November polls.

In a statement, Amazon called the move “short-sighted”, saying that “preventing high skilled professionals from entering the country and contributing to America’s economic recovery puts American’s global competitiveness at risk”, while Google stated that immigration has contributed immensely to America’s economic success, making it a global leader in tech, and also Google the company it is today. Sundar Pichai, the chief executive of Google, said that he is disappointed by Monday’s proclamation. Google will continue to stand with immigrants and work to expand opportunity for all, he added.

Stating that the proclamation undermines America’s greatest economic asset: its diversity, Twitter’s vice-president for public policy and philanthropy Jessica Herrera-Flanigan said that people from all over the world come to the US to join the country’s labour force, pay taxes, and contribute to the nation’s global competitiveness on the world stage.

The suspension on new visas applies to H-1B visas, popular among IT workers and their families, H-2B visas for nonagricultural seasonal workers, J-1 visas for doctors and researchers and L-1 visas used for intracompany transfers.

Food processing workers, which make up about 15 per cent of H-2B visas, have been exempted along with health care workers assisting with the coronavirus fight.

The proclamation that comes into force on June 24, is likely to impact a large number of Indian IT professionals and several American and Indian companies who were issued H-1B visas by the US government for the fiscal year 2021 beginning October 1. It is, however, unlikely that the curbs would impact those currently working in the United States on a work visa.

Indian IT industry body Nasscom had hoped for an exemption for tech workers, demanding the suspension to end by October, on grounds that they are treated as “essential workers”.

A person who is staying in the US on an H-1B visa has to leave within two months of losing their job. Estimates indicate that there are 309,986 Indians working on H1-B visa in the US.