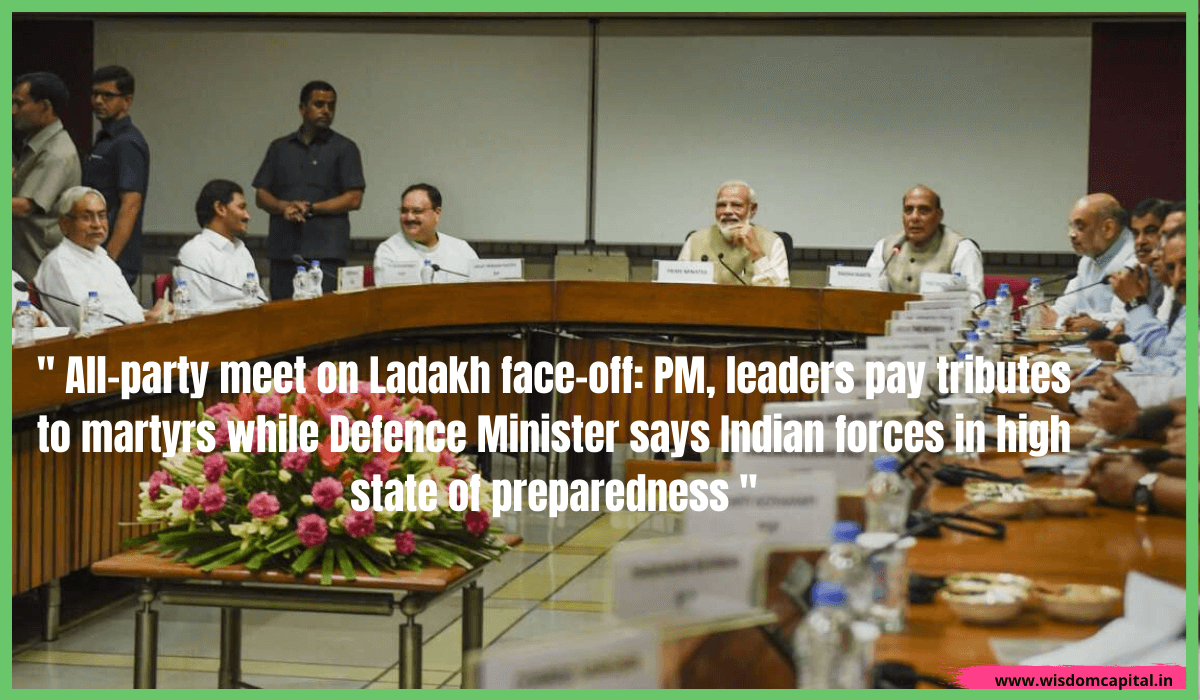 An all-party meeting called by Prime Minister Narendra Modi is underway this evening via video conference to discuss the India-China clash in the Galwan Valley in Ladakh on Monday in which 20 Indian soldiers were killed.

Defence Minister Rajnath Singh had personally called and invited all the leaders on behalf of PM Modi on Thursday.

The meeting began with leaders of all major political parties paying tribute to the soldiers who were killed in the line of duty on June 15.

According to sources, PM Modi, who is chairing the meeting, is likely to seek political consensus on the government’s diplomatic and military efforts.

The meeting began with Defence Minister Singh briefing political leaders on the current standoff between India and China in eastern Ladakh. He also furnished details about deployment of troops in the Galwan Valley before and after the violent face-off of June 15. Indian forces are in a high state of preparedness, the defence minister told the leaders at the meet.

Sources said that Union External Affairs Minister S Jaishankar will give details of past and present diplomatic efforts, including the de-escalation exercise.

A political controversy erupted ahead of the meeting with the RJD and AIMIM crying foul over not being invited. Reportedly, the parties weren’t called for the meeting based on their negligible presence in Parliament. AAP’s Rajya Sabha MP Sanjay Singh too had slammed the Modi government and the BJP over the apparent snub, but party chief and Delhi Chief Minister Arvind Kejriwal brushed it aside saying that the party stands with the country and our security forces. He added that strict action should be taken against China.

Ahead of the all-party meeting, Congress leader Rahul Gandhi today attacked the Government saying that it is now clear that the Chinese attack on Indian troops was “pre-planned” and that the government was “fast asleep” while the martyred jawans paid the price.

Meanwhile, the condition of Delhi health minister Satyendar Jain, who has tested positive for Covid-19, worsened today and he is being shifted to another hospital in the city, officials said.

Earlier this week, Satyendar Jain had tweeted  that he has tested positive for coronavirus. He was admitted to the Rajiv Gandhi Super Speciality Hospital (RGSSH) on Tuesday after he developed high fever and his oxygen saturation levels dropped. The AAP leader’s test result came positive on Wednesday evening after a second test.

AAP MLA and two other leaders of the party have also been infected by the virus.

Jain will remain the cabinet minister without any portfolio in the Delhi government until he recovers. The AAP government has said Deputy Chief Minister Manish Sisodia will take over the responsibilities of Satyendar Jain, including the health department, the public works department, power and other departments.