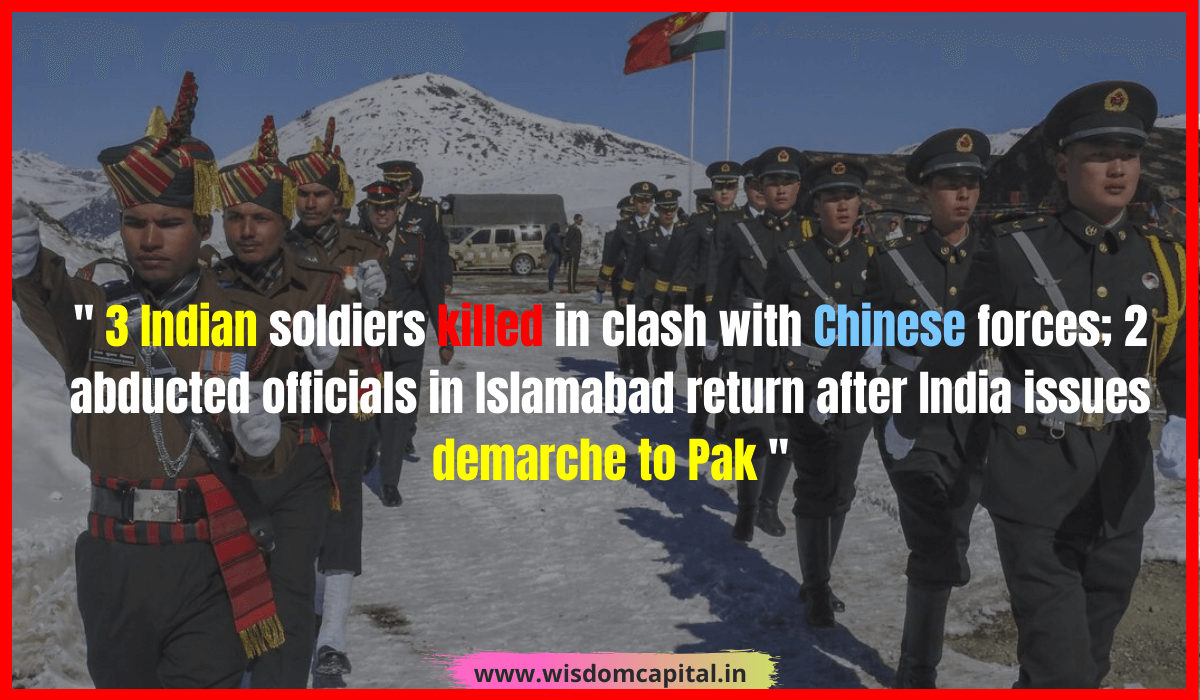 An Indian colonel and two soldiers have been killed in a “violent face-off” with China’s People’s Liberation Army on Monday night in eastern Ladakh, the army said in a statement. It added that India retaliated and there were casualties on both sides.

The Indian army said major generals from both sides were “meeting to defuse the situation”.

According to army sources, the soldiers were not shot but were killed in a physical combat on Indian Territory that involved stones and batons.  The army did not comment on this. However, this won’t be the first time the two armies on both sides have engaged in fisticuffs or used stones as missiles to attack each other in the area.

The Indian army said the incident took place at a time the de-escalation process was “underway in the Galwan valley”.

Zhao Lijian, the spokesperson of the Chinese foreign ministry, spoke about the close communication through military and diplomatic channels and blamed Indian soldiers for yesterday evening’s violent exchange in the Galwan Valley.

The three killings are the first Indian casualties in a clash with the PLA since 1975 when four Indian soldiers were killed in a remote pass in north-eastern state of Arunachal Pradesh.

Both sides are engaged in an eyeball-to-eyeball situation along the contested Line of Actual Control (LAC) in eastern Ladakh since early May.

The Chinese military buildup began soon after confrontations between border troops in Ladakh and Sikkim on May 5-6 and May 9.

Meanwhile, two Indian High Commission staffers in Pakistan, who went “missing” for most of Monday, have “returned” after India summoned CDA (charge d’affaires) Syed Haider Shah and issued a demarche — a protest lodged through diplomatic channels.

The demarche made clear that there should be no interrogation or harassment of the Indian officials”.

The two staffers, who have extensive injury marks to their neck, face, thighs and back, were abducted by about 15 armed men from a petrol station in Islamabad’s upscale locality a short distance from the Indian mission. Both were tortured for hours and framed for a road accident before being released.

The latest attack against Indian personnel  comes 10 days after reports emerged of ISI personnel chasing a vehicle in which India’s Charge d’affaires Gaurav Ahluwalia was travelling in Islamabad.

India and Pakistan had last year downgraded their diplomatic ties after India revoked Jammu and Kashmir’s special status and carved out two centrally-administered union territories. The missions of the two nations have since then been led by a charge d’affaires, not a high commissioner.

On Friday, India had registered a formal protest accusing Pakistan of violating the Vienna Convention and the 1992 bilateral Code of Conduct for diplomats.

Earlier on May 31, India had detained two Pakistan officials in New Delhi for espionage and expelled them the next day.